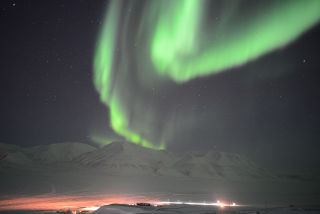 "Finding Life in Outer Space" travels to the Norwegian island of Svalbard where scientists are investigating how the Earth's magnetic field protects life from harmful solar radiation. The result is the fantastical aurora borealis.
(Image: © Smithsonian Channel)

Four exciting space documentaries will make their American debut on the Smithsonian Channel over the next two Sundays (March 25 and April 1). Together, the films tell humanity's story from the perspective of space: How life arose on the planet, what humans have accomplished in our time here and how we might leave our home to settle among the stars. "Leaving Earth: Or, How to Colonize a Planet," featuring Stephen Hawking; and "Finding Life in Outer Space" will air March 25, from 8 to 10 p.m. EDT and PDT; while "Billionaire Space Club" and "Earth From Outer Space" will air April 1 from 8 to 10 p.m. EDT and PDT.

"Finding Life in Outer Space" presents a grand history of the rise of life in the universe, retracing its origin to the very first matter created during the Big Bang. Smithsonian "wanted to tell the story of life from the beginning," producer and director Peter Chinn told Space.com. As the film progresses toward the present day, it reveals that the path to life was blazed by a series of new phenomena, each leaving the universe in a more complex state than it had been in before.

The special, which airs March 25 at 9 p.m. EDT and PDT, follows the infant universe as it cooled and transitioned from a realm of pure energy to a plasma of quantum particles, which eventually coalesced into atoms. We journey back to the age of the first stars, which illuminated a simple cosmos filled with hydrogen, helium and a bit of lithium. The lives and deaths of these first stars seeded the universe with diverse elements. Suddenly, there could be chemistry. As one generation of stars gave way to the next, more complex molecules could arise. [Our Expanding Universe: Age, History & Other Facts]

Making chemistry interesting is always a bit challenging, Chinn said. "If you go to an organic chemistry lab, you're looking at white, sort of clear liquids that are then put into heaters and spun. And out the other end comes a clear liquid," he said. Chinn's team used computer graphics to breathe some personality into the atoms and molecules, which became characters in the story of life, rather than mere objects.

As the show progresses, the development of life seems almost certain. It's a sentiment the production team worked hard to imbue into the film, according to Chinn. "We can't say [life] is definitely inevitable," Chinn said, "but a lot of the science is tending that way: the idea that the universe is inherently set up to create life wherever it can." The film also discusses some of the other places in our solar system life may have arisen, as well as how we might detect it.

Eventually, a rocky planet we call Earth arose, where a series of fortuitous events turned chemistry into biology and altered the composition of the planet itself. Then, a few hundred millennia ago, a species of clever, hairless ape evolved and began to change the environment to its liking.

On April 1 at 9 p.m. EDT and PDT, "Earth From Outer Space" picks up right where "Finding Life in Outer Space" left off. The film presents human progress as seen by astronauts aboard the International Space Station. As crewmembers discuss the march of progress across the globe, the film joins those on the ground who are leading these changes.

Perhaps the most striking impact humanity has had on Earth's surface can be seen in the rise of mega cities. Half of our planet, once shrouded in the darkness of night, now blazes with city lights. In less than 40 years, a small village just north of Hong Kong has grown to become the sprawling metropolis Shenzhen, China's Silicon Valley. Western cities glow orange from sodium street lamps, and Asian cities appear green from mercury-vapor lights. Meanwhile, Shenzhen glimmers with all the colors of the rainbow, its LEDs lighting the way toward a technological future.

From Shenzhen, the film travels to the foothills of Tanzania's snowcapped Mt. Kilimanjaro to discuss environmental change and efforts to combat it. In Las Vegas, an energy revolution is poised to power Sin City's insatiable demand for electricity, while in the Middle East, human ingenuity paints the deserts of Jordan green. The premise of the film — Earth from astronauts' perspective — is simple, yet powerful: as the narrator says at its beginning, "This is how we changed the world. Then looked down to see what we had done." [NASA's Best Earth-from-Space Photos by Astronauts in 2017 (Gallery)]

In the past few decades, however, humanity has increasingly been looking up, and now a new wave of entrepreneurs plan to expand our activity in space. In "Billionaire Space Club," the Smithsonian Channel invites viewers to explore the sector of private space startups and the dreams and ambitions of their founders. Join the adventure on April 1, at 8 p.m. EDT and PDT as the filmmakers travel around the American West, where companies like Virgin Galactic, Blue Origin and SpaceX are disrupting an industry that was once the exclusive domain of governments and legacy aerospace corporations like Lockheed Martin and Boeing.

Years after turning down an offer to be the first civilian in space, Virgin Galactic's Richard Branson is determined to offer individuals the life-changing opportunity to see their home planet from the rarefied vantage point of space. Jeff Bezos is also eager to provide this experience, with room for six aboard the capsule of Blue Origin's New Shepard rocket. Although still undergoing testing, passengers have already booked seats with these ventures.

In addition to offering the public an unforgettable experience in space, Bezos is committed to lowering the entry cost to space by developing reusable rockets. "Right now, the price of admission is just so high that not very many people get to exercise their creativity in the domain of space," the Amazon founder says in the film. Further in the future, companies like Deep Space Industries and Planetary Resources plan to set up industry in space, from orbital-refueling initiatives to asteroid mining. Like Bezos, Elon Musk is also cashing in on the ability of reusable rockets to lower launch costs, but SpaceX's CEO has even more ambitious plans. Ultimately, Musk wants his company to lead the way to the colonization of Mars within the 21st century.

In addition to Musk, many other entrepreneurs and scientists predict humans will progress from visiting space to colonizing it. On March 25, at 8 p.m. EDT and PDT, Stephen Hawking will discuss humanity's future in one of his last film appearances, "Leaving Earth: Or How to Colonize a Planet."

The concept of the film grew from a sentiment Hawking has expressed many times: Namely, that the future of Earth, and of humans on Earth, is not guaranteed, series producer and director Lucy Haken told Space.com. And since settling another planet takes time and investment, we need to start soon or risk having no options when things become critical. It's a provocative thought, Haken said, but it comes from a preeminent scientist, and so it demands serious consideration. [Stephen Hawking Warns: Humanity May Have Less Than 600 Years to Leave Earth]

Rather than simply drive the film forward with narration, Haken's team enlisted science writer Christophe Galfard and engineer Danielle George to bring viewers along as they explore what humanity must do to complete the task Hawking has set before us. "Sometimes you want it to be more of a personal exploration," Haken said, "going to these places and interacting with people."

In the film, Galfard and George learn about some of the potentially habitable exoplanets found in the past two decades. Travelers would have to take a journey of hundreds of thousands of years to reach the closest of these planets, even in our most powerful rockets. However, work is underway on radical new propulsion systemsthat are blindingly fast, which may just offer humanity a ticket to the stars. Galfard and George investigate the physical and mental challenges that will face the crew on their long voyage, as well as upon their arrival, and look at the technology they'll need to establish life and society on a new world. The film is a celebration of human curiosity and ingenuity, Haken said.

Humanity has arisen in a period of time that's just a fraction of the history of the universe. Tremendous changes that have taken place in Earth's development, as well as humanity's, have allowed us to flourish, and much is still to come. The Smithsonian Channel makes a good case that now is a pretty exciting time to be alive.