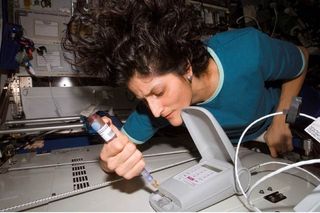 Astronaut Sunita"Suni" Williams opened the instrument kit bag, assembled LOCAD-PTS,and then took six readings during her recent mission to the station. "The first two readings were controls to showthat the instrument was operating correctly," explains Jake Maule,LOCAD-PTS project scientist at the Carnegie Institution of Washington."First she swabbed her palm, which she had first pressed to handrails andother often-handled surfaces that should have had lots of bacteria?and indeed,we got a strong positive reading."

The standard method ofculturing suspect bacteria is far more time-consuming. Typically, the investigatormust press a square of solid gel growth medium to a surface for a few moments,put it back in its package, and then let the sample incubate for a few days.

LOCAD-PTS, on the otherhand, takes only a few minutes. The investigator takes a sterile dry swab(similar to a Q-tip) and rubs it on the surface. Then, ultra-clean water isflushed through the swab; a few drops of the liquid is dispensed into theinstrument (see LOCAD-PTSphoto).

Microorganisms can affectthe health of both astronauts and spacecraft. (Yes, spacecraft can get"sick" from microorganisms; see UnwantedLife Forms Abound In Sick Spacecraft for details.) According to NormanWainwright of the Charles River Laboratories in Charleston, SC:

"Theability to monitor microorganisms would be especially important on long spacevoyages, not only to check the health of astronauts but also to monitorelectronics and structural materials, which can be corroded or otherwisedamaged by certain fungi and bacteria," says Wainwright. LOCAD-PTS isdesigned so that "astronauts can do the analysis onboard with no need to returnsamples to laboratories on Earth."

This wonderful littledevice is very similar to a fictional technology described by science fictionauthor GregBear in his new novel Quantico.Do terrorists have engineered bio-weapons? Better use the WAGD to find out:

She had yetto bring out her WAGD - pronounced Wag-Dee, for Wright Assay Germ Detector - abiohazard analyzer the size and shape of a large magic marker. She carried twoin her coat pocket...
(Read more about the WAGD germ detectorwith excerpts from an interviewwith Greg Bear)

The LOCAD-PTS is not to beconfused with the famous Star Trek tricorder, of which NASA has severalprototypes: