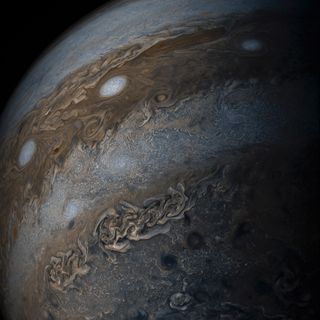 The colorful stripes of Jupiter run more than 1,000 miles deep and hold so much gas that their mass is about three times that of the entire Earth, three new studies find.

Jupiter's atmospheric stripes have been known for centuries; famed astronomer Galileo Galilei was the first to see the dark bands and bright zones on the largest planet in our solar system. "These bands are related to strong winds flowing on Jupiter," said Yohai Kaspi, lead author of one of the three studies and a planetary scientist at the Weizmann Institute of Science, in Rehovot, Israel.

However, until now, scientists were uncertain how deep those bands reached into Jupiter. NASA's Juno spacecraft, in orbit around Jupiter, "is now providing a 3D picture of these streams of Jupiter, and they go far deeper than ever expected," Kaspi told Space.com. [Jupiter in Pictures: The Amazing Views of Juno]

As Jupiter's belts of winds can flow at speeds of about 223 mph (360 km/h), they disrupt how mass is spread across the planet. Therefore, mapping Jupiter's gravitational field can shed light on how deep these winds extend below the surface.

The researchers found that these stripes extend 1,800 miles (3,000 kilometers) deep, or about one-twentieth the distance to the center of the planet — far deeper than previously thought. "These flows on Jupiter contain about 1 percent of the mass of Jupiter, which is equal to about three Earth masses," Kaspi said. "In comparison, Earth's atmosphere is less than one-millionth the mass of Earth."

One of the other studies found that, beneath the level of these winds, the planet's interior moves as a single body. In other words, it behaves as if it were a rigid solid, despite its fluid nature. Prior work suggested this is because, at the high pressures found within Jupiter, the hydrogen that makes up much of the planet separates into protons and electrons that generate strong magnetic drag forces that suppress winds flowing in opposite directions, the researchers said.

Future research will investigate how far Jupiter's Great Red Spot goes. "We know it's a storm that's lasted for hundreds of years sitting in the same place, but we've only seen it from the outside before," Kaspi said. "Now, with Juno, we can capture a 3D picture of it, which could help shed light on why it's been there so long."

Juno should also help reveal whether Jupiter possesses a solid core and, if so, estimate its mass.

"Knowing whether or not Jupiter does have a core would change our theories about how planets form," Kaspi said. "Since Jupiter was also the first planet in the solar system, forming after the sun, understanding Jupiter's origins would also help us understand the formation of the whole solar system."

The scientists detailed their findings in three studies in the March 8 issue of the journal Nature. You can find them here, here and here.