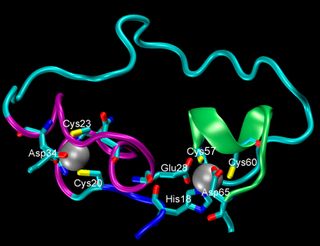 Life relies on the intricately folded amino acid chains known as proteins for practically every chemical task. Proteins catalyze chemical reactions throughout the cell, stitch RNA strands together, transport molecules around the cell and control what enters and leaves through the membrane. A modern cell cannot be a cell without them.

However, proteins pose a problem for scientists who study the beginnings of life. Present-day proteins have had the benefit of billions of years of evolution. They are highly specialized and, compared to most molecules, they are enormous. The odds of such lengthy amino acid chains forming "out of the blue" in life's primordial soup are beyond astronomical.

Origins-of-life researchers have put forward many ideas about how tiny, unpolished primordial proteins might have managed to carry out all the functions that life requires, but there is no clear consensus on what the first proteins looked like. [7 Theories on the Origin of Life]

To help answer these questions, Andrew Pohorille, senior astrobiologist at the NASA Ames Research Center, and his colleagues have been running computer simulations of hypothetical ancient proteins. In a paper published in the journal Life earlier this year, they detailed two unconventional protein structures that could have been useful in primordial cells.

While most modern proteins are rigid, specialist molecules with complex structures, these hypothetical early proteins would have been more flexible, but less efficient and precise, Pohorille argues.

"These were the handymen of proteins," Pohorille says. "In the beginning evolution did not require the high level of precision that we have now."

One of the proteins in his research emerged from a series of laboratory experiments on molecular evolution a decade ago. Although this new protein is only 87 amino acids long, making it less than a third the size of most proteins, it was able to help build phosphate bonds between RNA strands. However, what truly sets this little protein apart is its structure. Most water-soluble proteins, including RNA-strand-building proteins, have a bundle of tightly packed amino acids at their core and other distinctive features such as alpha-helices (these are the coiled structures of many proteins), but this protein was shaped like a choker necklace: a flexible loop with a rigid clasp. In this case, the clasp was made of charged amino acids that could bind to zinc atoms, sealing the loop and stabilizing the protein structure.

This structure is very unlike proteins seen in modern cells. Perhaps more importantly, the single loop-and-clasp structure can work for proteins that are even shorter than 87 amino acids in length. Pohorille and his colleagues simulated mutant versions of the protein based on versions synthesized by Burckhard Seelig's laboratory at University of Minnesota. They replaced the zinc-binding amino acids with ones that couldn't bind to the zinc. They thought getting rid of the charged zinc-binding amino acids would stop the protein from clasping its loop, but that's not what happened.

"It turned out that because the protein is flexible, this core rearranged itself so that another charged amino acid that was nearby took the role," Pohorille explains. "The protein did not fall apart. Because it was flexible, it could always rearrange itself such that it found some way to close this catalytic loop."

This strange, new protein could do an important job and remain functional despite mutations, and it was small enough that something like it could have plausibly formed on the early Earth without billions of years of evolutionary fine-tuning.

"The idea is that you might have a very simple protein architecture that's different from what we know, and because it's flexible, it's actually more robust than rigid structures," says Pohorille.

The team also looked at bundles of small proteins that open and close pores in cell membranes. Such proteins are vital for controlling the amount of chemical traffic going into and out of the cell. To form a stable tunnel through the membrane, these proteins have to form a stable tunnel through the membrane that can be opened and closed to molecular traffic. The cell membrane is 18 to 20 amino acids wide; anything smaller won't span the entire barrier. However, when Pohorille and his colleagues simulated the structures of channels formed by a 16-amino-acid-long protein called antiamoebin, which is presumably too small to span the cell membrane, they found that clusters of these short proteins could form channels of a different nature. These channels were unstable, constantly shifting, and would sometimes close and then reopen, but they were large enough to let potassium and chloride ions through, as well as water molecules.

Although antiamoebin is a protein found in modern fungi, Pohorille thinks that something similar could have emerged in the first protocells because antiamoebin is small, contains amino acids that were abundant on the early Earth, and can be made without ribosomes, a complex piece of cellular machinery that would have taken time to evolve.

Pohorille emphasizes that if researchers want to find the strongest candidate structures for early proteins, they have to consider unconventional structures that can perform the same functions as contemporary Earth proteins.

"Many people think of the origin of life as a problem in organic chemistry: how to make this or how to make that," says Pohorille. "I could give you all these molecules, and you will still not be able to make life. The essence of life is that you have a number of functions, and these functions are capable of working in concert."

Pohorille's work was supported by NASA Astrobiology through the Exobiology & Evolutionary Biology Program and performed at the NASA Ames Research Center and the Pittsburgh Supercomputer Center.