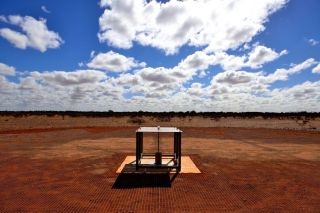 The EDGES ground-based radio spectrometer, located in Western Australia, may have shined some light on dark matter in its hunt for the first stars.
(Image: © CSIRO Australia)

A big clue about the nature of mysterious dark matter may have been discovered.

Astronomers with the Experiment to Detect the Global EoR (Epoch of Reionization) Signature (EDGES) project reported today (Feb. 28) that they've spotted the apparent fingerprints of the universe's first stars. The signal they detected was twice as intense as they had predicted, suggesting that either the hydrogen gas pervading the early universe was significantly colder than expected, or background radiation levels were significantly hotter than light from the cosmic microwave background, the radiation left over from the Big Bang that formed the universe.

"The only way to cool [the gas] is for something else, which is even colder, to take heat away," Rennan Barkana told Space.com by email. The EDGES team reached out to Barkana, an astronomer at Tel Aviv University in Israel who studies early stars, when they measured the surprising signal. He came up with a possible solution. [The Universe: Big Bang to Now in 10 Easy Steps]

"The only candidate constituent of the universe that could have been even colder than the gas is the dark matter," Barkana said.

The matter we're familiar with — stuff made of protons, neutrons and electrons — makes up just 15 percent or so of the matter in the universe. The rest is composed of a material that scientists cannot directly observe. This stuff, known as dark matter, gives itself away through gravitational interactions; for example, a galaxy may rotate faster than it should, given the amount of visible matter scientists have observed.

By probing the early universe, the EDGES scientists may have inadvertently found a new way to study dark matter, whose basic nature remains mysterious. Gas in the early universe was already extremely cold — the coldest it would ever be, Barkana said, because it had cooled down from the universe's hot early days but had not yet been heated by starlight.

While ordinary matter has been heating up in the 13.8 billion years since the Big Bang, dark matter has been cooling down. If particles of normal and dark matter collided with one another due to some nongravitational force — Barkana said this would be "somewhat analogous to an electric force" — then they would naturally transfer heat from the hotter one to the cooler one. In the process, the warmer object would cool ever so slightly.

The tiny amount of cooling is key to why this effect can be observed only in the early universe. With nothing else to heat the gas, it would quickly cool as it interacted with the dark matter, creating the unusual signal observed by the EDGES team. [Gallery: Dark Matter Throughout the Universe]

"We do not expect to notice the dark-matter cooling, except around the formation time of the first stars, when the gas was cold and there was no significant warming," Barkana said.

In addition to possibly revealing the influence of dark matter, the new EDGES observations may also have provided another clue about why the particles making up the stuff have been so elusive. Dark matter could be composed of conventional "baryonic" matter, but most scientists think it is instead made up of unusual particles.

Among the leading candidates for dark matter are hypothetical particles known as weakly interacting massive particles (WIMPs), which are generally estimated to be tens to hundreds of times more massive than protons. But the measurements from the EDGES team suggest that the dark-matter particles are no heavier than a handful of protons, Barkana determined.

He compared the collisions between baryonic-matter and dark-matter particles to tossing a tennis ball at a wall. The tennis ball returns at nearly the same speed because it didn't lose much energy to the far heavier wall.

"Similarly, if dark matter were much heavier than the gas particles, the latter could not cool even if the two collided," he said.

That could have important ramifications for dark-matter particles.

"People have been thinking about building new types of experiments that would look for lighter particles," he said. "The new clue from cosmology fits right in with that."

The observations also suggest that dark matter travels slowly rather than at near light speed, since fast-moving particles would heat the gas rather than cooling it.

To be clear, the dark-matter idea remains a hypothesis; it's far from settled science. The signal the EDGES team spotted came from the absorption of cosmic microwave background photons by hydrogen gas. Barkana said it's possible that something could be strange about the radio background rather than the gas.

"This would mean that the universe was full of radio waves, much stronger than those in the cosmic microwave background, already back when the stars had barely begun to form," Barkana said. "This would be quite unexpected but could correspond to a large population of black holes or some other very surprising astrophysical event."

Though he remains confident that dark matter is the culprit, Barkana noted that some caution is warranted, given that the conclusion is based on the first measurement of its kind.

"The measurement is solid, and it passed many checks," he said. "But still, it's important to get independent confirmation by a different instrument."

More detailed measurements will help to confirm the discovery, and Barkana said such measurements are "coming soon." Whereas EDGES takes an average measurement across the sky, arrays such as the Hydrogen Epoch of Reionization Array, in South Africa, and the international Square Kilometre Array—which will be built in Australia, New Zealand and South Africa — will measure more detailed patterns of radio waves in the sky.

"The dark-matter interpretation predicts a very specific pattern, due to the difference in how dark matter and ordinary matter behaved in the early universe," Barkana said. "So [these future observations] will be a clear test."