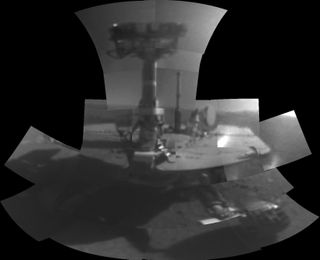 NASA's Opportunity Mars rover took this self-portrait with its Microscopic Imager in February 2018 to celebrate the 5,000th Martian day of its mission.
(Image: © NASA/JPL-Caltech)

Opportunity has taken photos of itself before, using the panoramic camera on its head-like mast. But the newly released image was captured by Opportunity's Microscopic Imager instrument, which the rover had never turned to take a picture of itself before, according to NASA officials.

"The Microscopic Imager is a fixed-focus camera mounted at the end of the rover's robotic arm," NASA officials wrote in a description of the image, which was released Monday (Feb. 26). "Because it was designed for close inspection of rocks, soils and other targets at a distance of around 2.7 inches (7 centimeters), the rover is out of focus." [The Top 10 Space Robot Selfies Ever]

The photo is a mosaic composed of multiple pictures snapped on sols 5,000 and 5,006 of Opportunity's mission. A sol is a Martian day, which is about 40 minutes longer than an Earth day. Sol 5,000 for the rover corresponded to Feb. 16 here on our planet.

The golf-cart-size Opportunity and its twin, Spirit, touched down on Mars in January 2004 and embarked on 90-sol missions to hunt for signs of past water activity on the Red Planet. Both rovers found a lot of such evidence — Spirit even rolled through an ancient hydrothermal site — and just kept on trucking. Spirit kept operating until 2010, and Opportunity remains active today, exploring the rim of a 14-mile-wide (22 kilometers) crater called Endeavour.

To date, Opportunity has traveled 28.03 miles (45.12 km) on the Red Planet — more distance than any other vehicle has ever covered on the surface of another world.