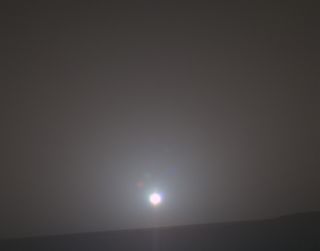 The golf-cart-size Opportunity touched down on Mars in January 2004, on a mission that was originally envisioned to last just 90 Martian days. (And we're talking here about Martian days, or "sols," each of which is 40 minutes longer than an Earth day.)

"Five thousand sols after the start of our 90-sol mission, this amazing rover is still showing us surprises on Mars," Opportunity Project Manager John Callas, of NASA's Jet Propulsion Laboratory in Pasadena, California, said in a statement.

Mission team members just reported one more such surprise — a network of possible "rock stripes" in Perseverance Valley, a channel that cuts through the western rim of the Red Planet's 14-mile-wide (22 kilometers) Endeavour Crater.

Opportunity's photos reveal that dirt and gravel have been arranged into apparent stripes, perhaps by wind, downhill tumbling, repeated cycling of freezing and thawing over the eons, or a combination of these factors, rover team members said. (Scientists think that Mars' obliquity, or axial tilt, has varied a great deal over the past few million years, causing substantial climate swings.)

"Debris from relatively fresh impact craters is scattered over the surface of the area, complicating assessment of effects of wind," Opportunity science-team member Robert Sullivan, of Cornell University, said in a different statement. "I don't know what these stripes are, and I don't think anyone else knows for sure what they are, so we're entertaining multiple hypotheses and gathering more data to figure it out."

Opportunity landed on Mars a few weeks after its twin, Spirit, which also set out on a 90-sol mission. Both rovers looked for signs of past water activity on the Red Planet — and both found such evidence in large quantities. Spirit, for example, found what appears to be an ancient hydrothermal system, where hot water flowed and bubbled through rock.

Spirit far outlasted its warranty as well, falling silent only in 2010 after getting bogged down in soft Martian sand. NASA declared the rover dead a year later.

But Opportunity continues to roll on, adding to its off-world driving record, which stands at 28.02 miles (45.1 km) and counting. (In second place is the Soviet Union's remote-controlled Lunokhod 2 rover, which traveled about 24.4 miles, or 39 km, on the moon back in 1973.) The rover has beamed about 225,000 images home to Earth during its time on the Red Planet, mission officials said.