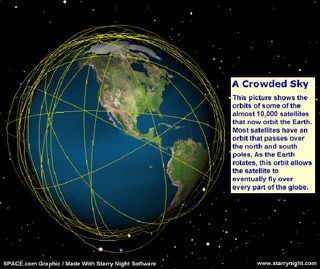 Crowded Sky: These paths represent just a handful of the more than 10,000 satellites orbiting Earth. Graphic made with Starry Night Software.

With the Space Shuttle Atlantis scheduled to undock from the International Space Station (ISS) on Tuesday, skywatchers across much of the United States and southern Canada are in for a real treat on Tuesday and Wednesday evenings.

Should weather conditions permit to offer clear skies, there will be a few opportunities to see both the Atlantis orbiter and the ISS flying across the sky from many locations.

The sight should easily be visible to anyone, even from brightly-lit cities.

The appearance of either the Space Shuttle or the Space Station moving across the sky is not in itself unusual. On any clear evening within a couple of hours of local sunset and with no optical aid, you can usually spot several orbiting Earth satellites creeping across the sky like moving stars. Satellites become visible only when they are in sunlight and the observer is in deep twilight or darkness. This usually means shortly after dusk or before dawn.

Shuttle Atlantis is expected to undock from the ISS at 10:40 a.m. Eastern Daylight Time on Tuesday.  Atlantis will fly around the ISS before finally pulling away from the Station at 12:28 EDT, although it should still remain at a relatively close distance to it until its scheduled return to the Kennedy Space Center in Florida on Thursday, June 21.

Both vehicles will be traveling across North America on northwest-to-southeast trajectories.

Appearing as a pair of very “bright 'stars,” the ISS should appear as the somewhat brighter object and will appear to be leading Shuttle Atlantis as they move across the sky.  A large telescope would be needed to make out details of the sprawling station. Traveling in their respective orbits at approximately 18,000 mph (29,000 kilometers per hour), both should be visible from about one to four minutes (depending on the particular viewing pass) as they glide with a steady speed across the sky.

Because of its size and configuration of highly reflective solar panels, the Space Station is now, by far, the brightest man-made object currently in orbit around the Earth.  On favorable passes, it approaches magnitude -3 in brightness, which would rival the planet Jupiter and is four times brighter than Sirius, the brightest star in the night sky.

On future missions, additional solar arrays will be deployed, making the ISS appear even brighter.  When completed in 2010, it might even rival Venus, the brightest planet.  And as a bonus, sunlight glinting directly off the solar panels can sometimes make the ISS appear to briefly flare in brilliance.

Generally speaking, the Shuttle-ISS tandem will be visible across southern Canada and most of the 48 contiguous United States (Hawaii and Alaska, unfortunately will not have favorable viewing passes during this upcoming week).

Locations that are situated above latitude 35-degrees north, will be able to partake in at least a few of the Tuesday/Wednesday evening viewing opportunities.  Between roughly 30 and 35-degrees north latitude, however, the viewing options become much fewer, perhaps only one or two chances at best.  Meanwhile, localities below roughly latitude 30-degrees north are (with a few exceptions) out of luck, with no visibility expected.

Again, keep in mind again that once undocked, Atlantis should appear to lead the Space Station by some distance as they track across the sky.

So what is the viewing schedule for your particular hometown? You can easily find out by visiting one of these three popular web sites: