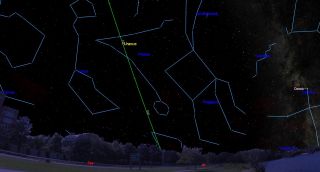 For about half an hour after dusk during the two week period preceding the new moon on February 15, look west-southwest for a broad wedge of faint light rising from the horizon and centered on the ecliptic (green line). This is the zodiacal light - reflected sunlight from interplanetary particles of matter concentrated in the plane of the solar system. Try to observe from a location without light pollution, and don't confuse the zodiacal light with the brighter Milky Way to the northwest.
(Image: © Starry Night)

The midpoint of the 89-day interval that runs from the winter solstice to the vernal equinox occurs this weekend — a natural "halftime for winter." Here's what to watch for in the night sky.

The days that marked the four major divisions of the year were once called "quarter days"; they originally marked the equinoxes and solstices, and each fit readily into the rhythm of the ways people farmed. In our 12-month calendar, the time span from an equinox to a solstice (or vice versa) lasted three months — a "season," so to speak.

And then there were the "cross quarter days," which marked the midpoint between a solstice and an equinox. One such day is observed each year on Feb. 2 and is known asCandlemas. The first of the four cross quarter days of the year or the middle of the winter season, it comes halfway between the December solstice and the March equinox. [Night Sky, January 2018: What You Can See This Month]

According to Almanac.com, "Candlemas acquired its English name from the candles lit that day in churches to celebrate the presentation of the Christ Child in the temple of Jerusalem."

But in actuality, winter's midpoint this year does not occur on Candlemas but rather on the following day, Feb. 3. The halfway point comes on Saturday at 11:21 p.m. EST (0421 on Sunday GMT) — and perhaps because it occurs on Super Bowl weekend this year, we could call it "winter halftime."

Although the altitude of the sun has been climbing and the length of daylight has been increasing since the winter solstice on Dec. 21, any changes up to this point have been relatively subtle. On the first day of winter in New York City, for example, sunset occurred at 4:32 p.m. local time, and the length of daylight (from sunrise to sunset) reached a minimum of 9 hours and 15 minutes.

But on Saturday, winter halftime, the sun sets at 5:16 p.m. in New York, with only 57 additional minutes of daylight having accumulated since Dec. 21. That's not very good news if you're not a fan of cold and snowy weather (and by now, you're probably Febru-weary of it all).

However, in the second half of winter, the effects of the northward shift of the sun's direct rays, or its increase in declination, starts becoming much more noticeable. In fact, by the time equinox day arrives, March 20 at 12:15 p.m. EST (1715 GMT), the length of daylight will have increased by almost 2 hours since Feb. 3.

And because daylight saving time returns on the second Sunday in March (the 11th), by March 20, New Yorkers will see the sun setting after 7 in the evening (7:08 p.m.) for the first time since Sept. 18.

But what about the groundhog?

Of course, here in the United States, we know Feb. 2 not as Candlemas, but as Groundhog Day, the day  we learn whether winter will persist for another six weeks (until the vernal equinox) or we will see an early spring. The "official" pronouncement comes from Punxsutawney Phil the groundhog and took place at about 7:30 a.m. EST (1230 GMT) at Gobbler's Knob, just outside Punxsutawney, Pennsylvania.

There is a distinct connection between Groundhog Day and Candlemas. Candlemas' alternate name was Brigantia, which references the Celtic female deity of light, because the sun is halfway between the winter solstice and the spring equinox.

According to a history of Groundhog Day in The Telegraph, "When German settlers arrived in the 1700s, they brought the celebration of Candlemas with them. German tradition holds that if the sun comes out on Candlemas, the hedgehog will see its shadow and six more weeks of winter will follow. If no shadow is seen, legend says spring will come early. The German settlers in Pennsylvania continued the tradition but used a groundhog rather than a hedgehog."

As a broadcast meteorologist, however, I should point out that Phil and his handlers don’t seem to play by the rule book. For one thing, according to Stormfax.com, Phil has managed to see his shadow 103 times since 1887.

Last year, for instance, skies were overcast with light snow falling. Yet somehow Phil saw his shadow. And in 2016, skies were clear and sunny, but Phil failed to see his shadow for only the 18th time in his illustrious career — a career, incidentally, in which his accuracy amounts to only about 39 percent.

Personally, I don't put much stock in Punxsutawney Phil's forecast. To me, it's nothing but hogwash.