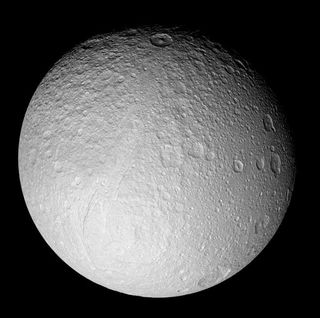 With this fabulous, full-disk mosaic, Cassini presents the best view yet of the south pole of Tethys.
(Image: © NASA/JPL/Space Science Institute)

Streams ofhot gas swirling around Saturn have been traced to two icy moons previouslythought to be geologically dead worlds.

Thefinding, detailed in the June 14 issue of the journal Nature, suggestsSaturn?s satellites Tethys and Dione might be volcanically active after all.

Known asplasma, the gas is composed of negatively charged electrons and positivelycharged ions, which are atoms with one or more electrons missing. After beingejected from the moons, the charged particles become trapped inside themagnetic field surrounding Saturn,called the magnetosphere.

Theparticles remain trapped only temporarily, however, because Saturn spins sofast about its axis?a day there is only 10 hours and 46 minutes long?that itdrags its magnetosphere and the trapped plasma inside it rapidly through space.

In 2004,NASA?s Cassini spacecraft revealedSaturn?s rapid rotation flattens the plasma into a disc, and that giant fingersof gas are being thrown out into space from the disc?s outer edge. Scientiststhink cold, fast-spinning gas particles get hurled outwards, away from thecenter of rotation, by the same centrifugal force that pushes your body againsta car door when the vehicle makes a sharp turn. Hotter, more tenuous plasmathen rushes in to fill the gaps. The ejected plasma particles get swept away bythe sun?s own streaming particles, called the solar wind.

Studyingthe electron component of the plasma, Jim Burch, an astronomer at the SouthwestResearch Institute in Texas and a member of the Cassini Plasma Spectrometerteam, and his colleagues traced the particles back to the orbits of Tethysand Dione.

?No matterwhere we looked, the source distance always mapped to the moons? orbits,? Burchtold SPACE.com.

?Theimplication is that there is a source of plasma on the two moons and that itcreated a ?donut? [of plasma] that goes around the planet,? he added.

Prior tothe new discovery, the only Saturn moons known to be active were Titanand Enceladus.

?This newresult seems to be a strong indication that there is activity on Tethys andDione as well,? said study team member Andrew Coates of the University of College London.

Somescientists had suspected Diones might be geologically active because NASA?sPioneer 11 probe detected plasma in the Saturn system in 1979. But thosefindings were cast into doubt when subsequent observations in the 1980s by theVoyager spacecraft didn?t find any evidence of plasma in the moon?s orbit.

?It was acontroversy,? Burch said.

The newfinding suggests the plasma rings might be transient, Burch said, and that thecharged partiwcles don?t last long enough for a plasma donut, or ?torus,? tocompletely encircle the planet.