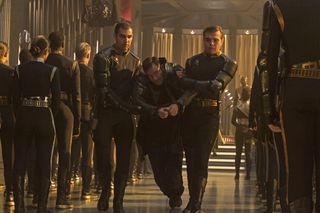 Warning: This recap includes spoilers for Episode 12 of "Star Trek: Discovery," along with discussion of sensitive and potentially triggering topics.

The strange behavior of Gabriel Lorca (Jason Isaacs) finally has a physical explanation rather than just plain old PTSD from seeing his last crew killed. As "Star Trek: Discovery" fans found out in the final few seconds of Episode 12, "Vaulting Ambition," Lorca is from the alternate universe.

There was a lot of evidence piling up this season about Lorca already; some fans figured out the plot twist weeks ago. The detail that had me wondering was his eyesight; he was overly sensitive to light, which he dismissed as the effect of watching his old ship explode. But in this episode, Emperor Philippa Georgiou (Michelle Yeoh) told Michael Burnham (Sonequa Martin-Green) that sensitive eyes are a problem that all alternate-universe folk have. [6 'Star Trek' Captains, Ranked from Worst to Best]

Because "Star Trek" fans are smart people, some correctly guessed Lorca's origins many weeks ago. In an interview with GamesRadar in November, Isaacs said that while some theories are right, nobody's got the whole puzzle yet.

Anyway, Lorca is finally free from the torture he's been stuck in for the last three episodes, and he's just killed one of Georgiou's crewmembers. Apparently, they had some beef about a woman called Ava; more to come in Episode 13, which will be released next Sunday (Jan. 28) on CBS All Access around 8:30 p.m. EST.

Strangely, not much else happened

Though this episode was packed with so much information, I realized, looking back, that most of its 45-ish minutes just involved picking up balls from Episode 11. (To be honest, I didn't find this episode as compelling as the past two, but I do understand that the screenwriters needed to do a bunch of plot cleanup.)

There's not much else to say about the other subplots, but here's where we stand.