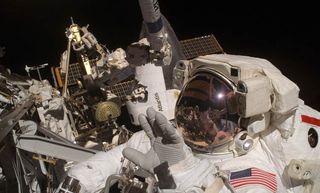 SpacewalkersJim Reilly II and Danny Olivas will go over plans to use a medical stapler, dentaltool and Atlantis’ heat shield repair kit to securea loose blanket on one of their shuttle’s aft engines.

“What thecrew will be doing tomorrow, primarily, is getting prepared for that (extravehicular activity),” NASA’sISS flight director Kelly Beck told reporters here at the Johnson Space Center lateWednesday after mission managers added the repair to Friday's planned spacewalk.

Reilly and Olivas willrehearse different ways of using staplers from the medical kits aboard Atlantis and the ISS tostaple a 4-inch by 6-inch (10-centimeter by 15-centimeter) triangularblanket flap back into place on the shuttle’s left Orbital ManeuveringSystem (OMS) pod. Aerodynamic loads on the flap freed it from its mount duringthe shuttle’s June 8th launch, NASA has said.

While Atlantis’damaged thermal blanket does not pose a risk to its astronaut crew for landing,there is a possibility that it could lead to damage to the OMS pod’s underlyingstructure and prompt lengthy repairs, NASA has said.

Currentplans call for a spacewalker to first pat the flap down flat with either hishand or a scraper-like tool originally designed to repair Atlantis’heat-resistant tiles and carbon composite panels, mission managers said.

“Theseblankets are very formable,” said John Shannon, NASA’s deputy shuttle programmanager, late Wednesday. “It will take the shape that you put it in and willstay there.”

Next, therepair requires a double row of staples using the medical staplers along the tear’s edges, andfinishes with the use of a dental tool and stiff nickel chromium pins to securethe torn blanket and part of an adjacent one into nearby tiles, Shannon said. The crew will take six staplers with them, each with 15 staples.

“The teamwas very confident that the staples with the pins would meet our objectives,” headded.

As abackup repair, Reilly and Olivas will also practice a bit of orbitalsewing using stainless steel wire for thread and a spacesuitdarning needle.

“I thinkthe likelihood of actually having to use this is extremely low,” Shannon saidof the backup sewing method.