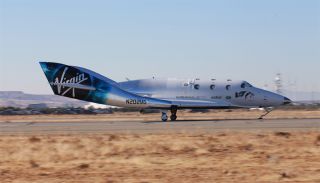 Virgin Galactic's second SpaceShipTwo vehicle has taken to the skies once again.

Unity hadn't been aloft since August 2017. Engineers and technicians had spent the intervening five months making sure the vehicle will be ready for the higher loads of rocket-powered flight when the time comes, according to the company. [Photos: Virgin Galactic's SpaceShipTwo VSS Unity]

"After release from mothership VMS Eve, the spaceship was immediately pushed into a sharp descent, accelerating to Mach 0.9, which is around the maximum airspeed we can achieve without igniting the rocket motor!" they added. (Mach 1 is the speed of sound — 767 mph, or 1,234 km/h, at room temperature.)

As that note indicates, SpaceShipTwo is designed to be carried aloft by a specialized airplane. During operational flights, the spacecraft will be dropped at an altitude of about 50,000 feet (15,000 meters), then boost itself to suborbital space using its own rocket motor.

The passengers aboard — SpaceShipTwo can fit six paying customers, along with two pilots — will get to experience a few minutes of weightlessness and see the curvature of Earth against the blackness of space before gliding back down to Earth.

Tickets to ride SpaceShipTwo currently sell for $250,000. To date, more than 600 people have put a deposit down for a seat, Virgin Galactic representatives have said.

But VSS Unity will have to ace some powered flights before it can start taking customers and research payloads to suborbital space. The company is laying the groundwork for powered tests: During today's flight, Unity carried water ballast to simulate the rocket motor's weight, and it was outfitted with a thermal protection system, which will shield the spacecraft from the heat and friction of atmospheric re-entry, Virgin Galactic representatives said.