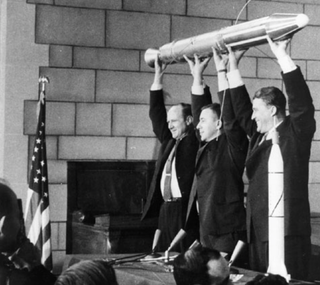 The United States’ first successful satellite, Explorer 1, launched on Jan. 31, 1958, and discovered the radiation belt around Earth. Holding a model of the satellite in celebration after its successful launch are (left to right): William Pickering, former director of the Jet Propulsion Laboratory, which built and operated the satellite; James van Allen, of the State University of Iowa, who designed and built the instrument on Explorer 1 that detected the radiation belt; and Wernher von Braun, leader of the U.S. Army's Redstone Arsenal rocket team.
(Image: © NASA/JPL)

You can start each day of the new year with a little spaceflight history, thanks to NASA's Jet Propulsion Laboratory (JPL).

JPL, the agency's hub for robotic planetary exploration missions, is offering a free download of a spaceflight-themed 2018 calendar. You can get it here.

The calendar marks the many spaceflight milestones and achievements that JPL helped make happen, from the launch of the United States' first successful satellite, Explorer 1, in January 1958 to the epic Cassini Saturn mission's "Grand Finale" this past September.

JPL's roots trace all the way back to the mid-1930s, when a group of students at the California Institute of Technology in Pasadena and some amateur rocketeers began conducting rocket experiments — first at the Caltech campus and then, after an explosion there, in a dry canyon in Southern California's San Gabriel Mountains.

Indeed, the new calendar's image for October 2018 shows five of these trailblazers lounging at the canyon test site in 1936.

These experiments had some success, leading to funding support from the U.S. military. By 1943, the Caltech rocket team was referring to its base of operations as the Jet Propulsion Laboratory. JPL officially became a part of NASA in late 1958, just after the space agency's creation.

Over the years, JPL has managed most of NASA's famous, big-ticket planetary missions, such as the Viking Mars orbiters and landers, the twin Voyager probes, Cassini and the car-size Curiosity rover, which touched down on the Red Planet in August 2012.