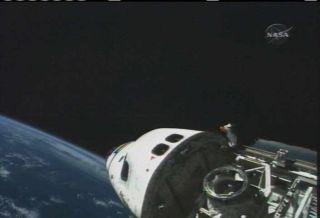 The space shuttle Atlantis, seen here backlit by Earth via a robotic arm-mounted camera, will dock at the International Space Station on June 10, 2007.
(Image: © NASA TV.)

Three astronauts living aboard the International Space Station (ISS) will roll out the welcome mat for NASA's Atlantis shuttle crew Sunday as their two spacecraft head toward an afternoon rendezvous high above Earth.

Commanded by veteran shuttle flyer Rick Sturckow, Atlantis' seven-astronaut crew is due to arrive at the ISS at about 3:38 p.m. EDT (1938 GMT) following a two-day orbital chase aimed at continuing space station assembly. Atlantis' STS-117 astronauts will be the first human visitors to the ISS since April and are eagerly awaited by the outpost's Expedition 15 crew.

"I don't know that it's going to be 'Wow, look at that space station,'" said Atlantis mission specialist Patrick Forrester, who last visited a much smaller ISS during NASA's STS-105 mission in 2001, of today's planned docking. "But I think I'm going to be kind of overcome by 'I wish I could think of the right words.'"

ISS commander Fyodor Yurchikhin and flight engineers Oleg Kotov and Sunita Williams watched live video of Atlantis' Friday evening launch from their perch about 220 miles (354 kilometers) above Earth, and could be seen waving their arms in celebration in video piped down from the orbital laboratory.

"It was just amazing to be up here watching Atlantis take off, it was just beautiful," Williams said. "We're ready for our visitors, well, actually I think we need to clean up a bit."

Atlantis' STS-117 crew is hauling a 17.5-ton pair of new starboard side girders and wing-like solar arrays that will help provide power to new station modules and laboratories. Just after docking, the $367.3 million station trusses — the heaviest payload ever launched to the ISS -- will be plucked from Atlantis cargo bay via robotic arm for later installation during the planned 11-day mission.

For Williams, a NASA astronaut who has lived aboard the ISS since December 2006, Atlantis' arrival is also bringing some relief. The shuttle is ferrying NASA spaceflyer Clayton Anderson to take her place among the Expedition 15 crew in a one-person rotation.

Before Atlantis arrives at the ISS, Sturckow will fly the 100-ton spacecraft through a graceful nine-minute back flip to Expedition 15 crewmembers inside the station a clear view of the heat-resistant tiles mounted to the shuttle's underbelly.

"The job for us is to set the shuttle up so it's in a good position when we initiate that maneuver," Sturckow said in a NASA interview.

Dubbed the Rendezvous Pitch Maneuver, the shuttle back flip calls for Sturckow to bring Atlantis within 600 feet (182 meters) of the ISS, and then pivot the orbiter full circle before heading up to the station's U.S. docking port. During that time, the ISS Expedition 15 astronauts will use high-resolution cameras to snap detailed photographs of Atlantis' heat shield.

Engineers on Earth will study the heat shield images; data from an orbital inspection of the shuttle's nose cap and wing edges performed Saturday; and NASA's STS-117 launch video from ground-based and air-based cameras (including some mounted to Atlantis' fuel tank and rocket boosters) to determine the integrity of Atlantis' protective tiles and carbon composite panels.

Mission managers said late Saturday that, after an initial glance at Atlantis' launch video and the heat shield inspection, the orbiter appears to be in good shape. Engineers continue to study the impact of a torn bit of fabric insulation near the rear of the spacecraft, they added.

"I have great confidence in the ground team to determine whether it's a problem or not," John Shannon, chair of NASA's STS-117 Mission Management Team, said of the perturbed blanket in a mission briefing.

Meanwhile, the Atlantis astronauts are looking forward to seeing the ISS out the shuttle's windows and get a first-hand look at their orbital construction site.

"It is pretty dynamic when you see it," Forrester said, adding that the backdrop of Earth is equally stunning. "It's quite a picture."