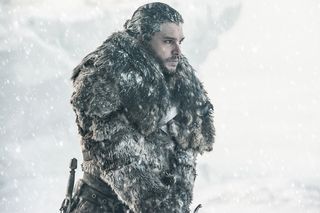 Jon Snow's frigid walks beyond the Wall in "Game of Thrones" are about the same as venturing outside in Fairbanks, Alaska, according to a new climate model of the fictional world.
(Image: © HBO)

If you've ever wondered what kind of weather Jon Snow faces as he fights against White Walkers in the hit television fantasy series "Game of Thrones," the conditions are about the same as they are in Fairbanks, Alaska, according to a new climate simulation of the fictitious realm. Plus, dragons scorching up Westeros could further destabilize The Wall through global warming.

Thanks to the fantastic imaginations of three real researchers in the United Kingdom, a new paper purports to come from two beloved characters — scholarly-apprentice Samwell Tarly and former-wildling Gilly — who create a new climate simulation of their planet after digging through ancient manuscripts.

Climate simulations are modeled after basic physical principles, so scientists can use those techniques to model worlds other than Earth, including that worlds' hypothetical weather and seasons. [Aidan Gillen, Littlefinger on 'Game of Thrones,' Stars in Comet Video]

"Because climate models are based on fundamental scientific processes, they are able not only to simulate the climate of the modern Earth, but can also be easily adapted to simulate any planet, real or imagined, so long as the underlying continental positions and heights, and ocean depths are known," Dan Lunt, a researcher at the School of Geographical Sciences at the University of Bristol, said in a statement. Lunt is one of the real authors of the study.

George R.R. Martin, who wrote the series of books that "Game of Thrones" is based on, has provided many details about the continents Westeros and Essos in his books, which helped Lunt and his fellow researchers create the groundwork for an accurate study. One helpful detail was that the great trading city of Qarth was well-known as the center of the world, helping the team to locate an equator for the planet that would pass over the city

While much of the "Game of Thrones" climate seems similar to climates found on Earth, one of the most important fantasy elements within the story is that the seasons last years, not just a few months. So Lunt's group adjusted the model to account for a periodical sway in the tilt of the planet's axis that would allow the seasons to run longer. (Unlike in the "Game of Thrones" world, seasons on Earth last just a few months because the tilt of the planet's axis remains, for the most part, constant.)

And as for the navigational stars that keep their positions in the night sky, guiding Essos traders year-round despite the planetary wobble causing long seasons? Well, the study blames it on Melisandre and the magic of the Lord of Light. I mean, if Jon Snow could be brought back from the dead and if the sorceress can appear young despite being quite old, surely she knows something about warping space-time.

While the researchers certainly produced the lengthy study as fans, the out-of-the-ordinary simulation has important implications for the science behind climate study. [See the Effects of Climate Change Across Earth (Video)]

"This work is a bit of fun, but it does have a serious side," Carrie Lear, a researcher at Cardiff University who was also involved with the work, said in the statement. "Climate models simulate real physical processes which operate in both cooling and warming climates. Scientists working on [projects such as] the SWEET project are using exciting novel techniques to reconstruct the climate of super-warm states of Earth's past."

The climate simulator ultimately yielded some interesting and nerd-worthy results. The hot-blooded members of the Martell family, for example, were definitely worthy of their sand snake nicknames: They enjoyed warm weather even in winter, with temperatures in their native Dorne reaching as high as 30 degrees Celsius (86 degrees Fahrenheit). The paper's listed author, "Samwell Tarly," also said he found helpful information for the Night's Watch, which is what incentivized him to travel to the Citadel, the location of the manuscripts, in the television storyline. "In summer, only the high altitude [mountains] beyond The Wall remain below freezing (a potential hibernation zone for the White Walkers in summer — must remember to let the Lord Commander know)..." The study also found that Casterly Rock, the stronghold for the frequently villainous Lannister family, has a climate that's similar to Houston's.

Dragon breath might escalate global warming, too. "A doubling of carbon dioxide could result in a sea level rise of about 10 meters (32 feet) in the long term, surely enough to inundate parts of coastal cities (including King's Landing), towns and villages, with resulting social unrest and instability, and possibly (even more) wars and deaths," stated Tarly.

"As such," Tarly said, "as a climate scientist, I strongly encourage all the Kingdoms of our planet to reduce their emissions of carbon dioxide, and seek alternative 'renewable' energy (such as windmills)."