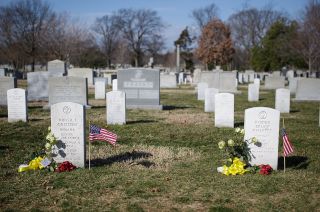 The graves of astronauts Virgil "Gus" Grissom and Roger Chaffee at Arlington National Cemetery, as seen in January 2017, will soon be joined by a memorial to the Apollo 1 crew.
(Image: © Joel Kowsky/NASA)

A memorial marker will be erected at Arlington National Cemetery honoring NASA's Apollo 1 astronauts who were killed in a fire on the launch pad 50 years ago.

President Donald Trump on Tuesday (Dec. 12) signed into law the National Defense Authorization Act for Fiscal Year 2018, which in addition to calling for appropriations for the military activities of the Department of Defense, included a provision to construct a memorial to the crew of Apollo 1.

The act directs the Secretary of the Army to authorize "the construction, at an appropriate place in Arlington National Cemetery [in] Virginia, of a memorial marker honoring the three members of the crew of the Apollo 1 who died during a launch rehearsal test on January 27, 1967." [50th Anniversary of Apollo 1 Fire: What NASA Learned from the Tragic Accident]

The act calls for the NASA Administrator, the Commission of Fine Arts and the Advisory Committee on Arlington National Cemetery to consult with the Secretary of the Army on the marker.

The Apollo 1 memorial was first proposed in Congress in September 2016 by Rep. Eddie Bernice Johnson (D-TX), the ranking member of the Committee on Science, Space, and Technology. Johnson originally introduced the idea for the monument in a dedicated bill but after it failed to reach a vote, she resubmitted the "Apollo 1 Memorial Act" as an amendment to the National Defense Authorization Act.

"I'm deeply grateful that the House of Representatives has accepted my amendment ... to honor astronauts Virgil I. 'Gus' Grissom, Edward H. White II, and Roger B. Chaffee, who perished 50 years ago while preparing for the Apollo 1 mission," Johnson said in a statement. "It is both right and long overdue that we honor the memory of these heroes by means of a memorial."

Grissom, White and Chaffee were conducting a pre-launch "plugs out" test when a fire ignited inside their Apollo 204 command module. The fire engulfed the capsule, fueled by a pure-oxygen atmosphere, leading to the men's death.

Although other NASA astronauts had died in earlier aircraft and automobile accidents, the Apollo 1 fire marked the first time that the U.S. space program suffered a fatal tragedy as part of its active spaceflight efforts.

Grissom and Chaffee were interred at Arlington Cemetery. White was buried at the Military Academy at West Point in New York.

The act does not direct where in the cemetery the Apollo 1 marker will stand, other than it is not to be constructed "in a location that is otherwise suitable as an interment site."

In the wake of the Jan. 28, 1986 Challenger accident, the unidentified remains of the seven astronauts were interred near the grave for the mission's commander. According to the Arlington National Cemetery website, "it was decided by family members and NASA to construct the monument over the cremated remains."

Family members of the STS-51L astronauts and about 400 people attended the monument's dedication on March 21, 1987, including then-Vice President George H.W. Bush.

A similar monument was erected to honor the seven STS-107 crew members lost aboard the space shuttle Columbia on Feb. 1, 2003. Authorized and funded by the Columbia Orbiter Memorial Act, the monument was dedicated a year later on Feb. 2, 2004.

Johnson originally proposed a budget of $500,000 for the Apollo 1 memorial and then reduced that to $50,000 when it was offered as an amendment to the National Defense Authorization Act. As agreed to by the House and Senate, the legislation as enacted omitted any federal funding and instead directed the marker to be privately financed.