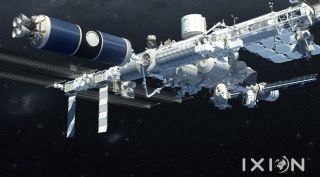 An illustration of the Ixion module, an upper stage left in orbit and refitted as a space station module, being attached to the ISS>
(Image: © NanoRacks)

HOUSTON — A five-month study supported by NASA has concluded that it is technically feasible to convert a launch vehicle upper stage into a habitat module that could be used on the International Space Station or future commercial space station.

Jeffrey Manber, chief executive of NanoRacks, discussed the results of the study, part of NASA's Next Space Technologies for Exploration Partnerships 2 (NextSTEP-2) effort, in panel discussions Dec. 6 at the SpaceCom Expo here.

The concept, called Ixion, involves taking an Atlas 5 upper stage left in low Earth orbit after a launch and refitting it with life support and other systems needed to support a crew. That converted module could then be attached to the ISS or be used as part of a standalone commercial space station.

The idea of converting an upper stage into a space station module is not a new one. Manber noted that, half a century ago, NASA studied the so-called "wet workshop" approach as one approach for what would become the Skylab space station, but concluded it was too difficult.

Technological improvements have changed that assessment. "We're now increasingly confident that we can show NASA that this second stage can be repurposed both using crew or even, amazing to me, doing it robotically," Manber said.

Manber said later that NanoRacks has looked at both the Centaur upper stage currently used by the Atlas 5 as well as the Advanced Cryogenic Evolved Stage (ACES), a new upper stage under development by United Launch Alliance for use on its next-generation Vulcan rocket. ULA is one of the companies partnered with NanoRacks on the Ixion study, along with Space Systems Loral and space tourism company Space Adventures.

Should such a module eventually be built and flown on the ISS or a commercial station, Manber said there is a wide variety of potential uses for it. They range from space tourism to on-orbit manufacturing. There are "several legitimate consumer non-traditional customers that have interest in using a commercial platform," he said, stating those potential users were under non-disclosure agreements.

"For us, it's to now envision how we can make this sustainable," he said. "We're now looking at how we can do this in a commercial manner. One of the clues is that one of our partners is Space Adventures."

However, he cautioned that, at this early stage, it's not clear what applications for such a module will develop, and to what size. "We don't exactly yet know" what those uses will be, he said, requiring a "leap of faith" of some degree that commercial modules will serve the needs of the market.

Manber didn't discuss what the immediate next steps for the Ixion module concept were. "We'll have some more announcements in the coming months on what we're going to be doing with this commercial module," he said.