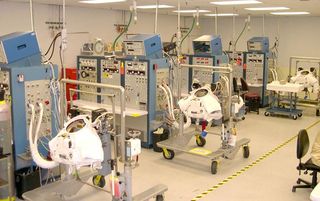 Space shuttle-era spacesuit upper-torsos are serviced and readied for flight inside United Space Alliance's spacesuit lab in Houston, Texas. Originally designed to be reusable, the suits are destined to be disposed of in space due to weight limitations imposed by NASA's new crew spacecraft, Orion.
(Image: © NASA)

Thespacesuit that Ed White wore 42 years ago this week during the first Americanspacewalk is on display at the National Air and SpaceMuseum in Washington, DC.

Within thesame building, visitors can see the spacesuits that Neil Armstrong and Buzz Aldrin wore during the first moonwalk.

Indeed, all31 spacesuits worn by astronauts while either space- or moon-walking during theGemini, Apollo and Skylab programs are now owned by the Smithsonian and areeither on exhibit, on loan or being preserved for study by researchers andhistorians.

If youwanted however, to see a flown spacesuit worn on any of the prior 77 spaceshuttle extravehicular activities (EVAs, a.k.a.spacewalks) or any of the 53 EVAs made with Americanspacesuits out of the International Space Station, you would have to looksomewhere else than in a museum.

There aren't any on exhibit today and if NASA's plans for theshuttle-era spacesuits hold true, there may be none remaining for the museumsto preserve, let alone display.

Like thespace shuttle on which they fly, modern NASA spacesuits or extravehicularmobility units, EMUs were designed to be reusable.Whereas Gemini, Apollo and Skylab astronauts wore suits that were sized to theindividual, shuttle spacewalkers wear 'off the rack' suits that are availablein just a few sizes.

Furthermore,they are mix and match; shuttle astronauts don suits that are assembled fromseparate upper and lower components, in addition to the helmet, boots andgloves, as well as the portablelife support system (PLSS pronounced 'pliss')worn on their back. Each of the parts may have different flight histories, asthey were flown in different configurations to compensate for different-sizedastronauts.

So forexample, the EMU worn by Kathy Sullivan on the first Americanfemale EVA in 1984 may have later been divided and flown again ascomponents of any number of other astronauts' spacesuits. It doesn't exist anylonger as a complete spacesuit and NASA's records only track the parts by themissions on which they flew rather than by whichastronaut wore them.

Even so,museum curators had hoped that when NASA no longer needed all the flowncomponents, that through their own research they could piece togetherindividual spacesuits. That of course assumed that NASA would retire thespacesuit parts such that the museums could obtain them.

Six ofone, half a dozen of another

What if youwere to try to assemble as many spacesuits as possible from all the differentflight components? How many would be there be?

"Wehave lots of components and a lot of [them] are sized. So the way we answerthat question from our internal bookkeeping is 12 and that's really 12 lifesupport systems," explained Stephen Doering, whoheads NASA's spacewalk activities office, in an interview with collectSPACE.com."The limiting factor for a functioning spacesuit would be the PLSS backpack."

In fact,throughout the shuttle program there have been a total of 16 backpacks. Twowere destroyed in 1986 when Challenger broke apart, but were later replaced.Two more were lost in 2003 on-board Columbia.

Beyond the PLSS,the hard upper torso (HUT) would be the next component in limited supply, said Doering.

"Thelimiting factor from a display perspective... is the pressure garment, thegloves, the legs, the arms, the hard upper torso, for which it is not reallypossible to give you a count," said Doering.

Accordingto Doering, there exists a possible 13th PLSS."We have one qualification unit that's not flight ready, it's called ClassII. And that's the only one out there."

Continue reading oncollectSPACE.com to learn why a fiery fate awaits the shuttle spacesuits.