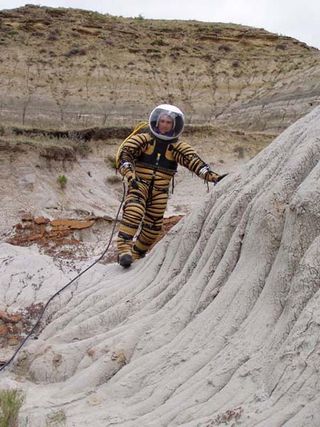 A spacesuitprototype designed for Mars exploration is bounding across the North Dakotabadlands this week in a series of field tests to check its mobility and performance.

Engineersand university students are putting their North Dakota Experimental PlanetarySpace Suit through a series of challenges, including mock-Martian hikes, samplecollections and - this Saturday - a simulated sandstorm.

The Marsspacesuit is the culmination of 14 months of work by faculty and students withthe North Dakota Space Grant Consortium, which received $100,000 from NASA todevelop the prototype. [The local public is invited to view the Mars spacesuitin action on Sat. May 6, weather permitting, at its North Dakota test site.Click herefor directions.]

"It'sactually going much better than we expected," said Pablo de Leon, the project'smanager, during a telephone interview. "This terrain, it's probably verysimilar to some of the places on Mars."

The newsuit just one effort to advance human space exploration outside the safety of aspacecraft. Researchers at the Massachusetts Institute of Technology, forexample, are developing a Bio-SuitSystem as a potential future spacesuit.

Anexperienced spacesuit designer and former Ansari XPrize contender, de Leon and his team have assembled a 50-pound (23kilogram) spacesuit - without the life support backpack - that can be sealedand pressurized, locking its inhabitant behind a helmet and six layers ofprotective fabric. A backpack containing communications equipment is equal insize to current life support units used in NASA suits today, the team said.

The result,researchers hope, is a planetary spacesuit smaller than thoseused in Earth orbit by NASA and Russia's Federal Space Agency, and moreflexible than NASA's Apollolunar spacesuits, the only other garments to be worn on another world.

"We wantedto really concentrate on the suit to improve mobility and to create a planetaryspacesuit instead one for zero [gravity]," de Leon said. "We're trying tocontain the human body in what is essentially a balloon of anthropomorphicform."

Whenspacesuits are pressurized with air they can become stiff, making simple fingermovements a chore for astronauts in space or on another world, he added. Thegoal is to reduce the amount of effort required simply to move on Mars, wherefuture explorers will likely stage many extravehicular activities (EVAs) andhave reuse and repair their own spacesuits, de Leon said.

One of theprototype's most noticeable features is a bright blue covering, designed forthermal protection and to guard against dust, which can be removed.

"I believethat one of the biggest challenges is going to be dustcontainment," de Leon said, adding that the prototype's dust jacket may notbe enough for Mars explorers. "The particles on Mars are very small, liketalcum powder. So it's going to be challenging to do several EVAs and maintaina good level of containment."

Field testsfor the Mars prototype suit began May 1, with space studies graduate studentFabio Sau tucked inside the prototype from the start.

"It's avery personalized suit," Sau told SPACE.com from the North Dakotabadlands test site. "They built the suit based on my measurements."

Sau saidthe suit, which has performed great so far, comes in two primary pieces splitat the waist between upper torso and lower body. Helmet and glove attachmentscomplete the outfit, which is then pressurized to about 1 pound per square-inch(psi) for tests, he added.

Forcomparison, NASA spacesuits are pressurized up to 4.3 psi while their RussianOrlan counterparts are set at 5.8 psi.

"The mostdifficult part is entering the upper torso," Sau said, adding that from startto finish he can don the suit in 15 minutes with some help from his colleagues.

Sau saidgetting the opportunity to work with actual hardware has been an amazingexperience, which de Leon hopes will encourage other university students topursue humanspaceflight-related careers.

"The maininterest of NASA when they gave us this grant was to train the new generationof space studies students and engineers, because [they are] going to be theworkforce for the future missions," de Leon said. "The [spacesuit] improvementwe've seen is very significant, but of course we still have a long way to go."