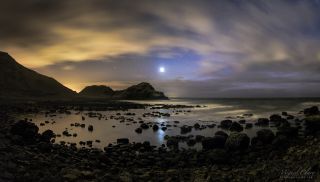 The bright planet Venus reflects off the ocean surface and illuminates the evening sky at the Causeway Coast in Northern Ireland in this photo by Miguel Claro.
(Image: © Miguel Claro)

Miguel Claro is a Lisbon, Portugal-based professional photographer, author and science communicator who creates spectacular images of the night sky. As a European Southern Observatory photo ambassador, a member of The World At Night and the official astrophotographer of the Dark Sky Alqueva Reserve, he specializes in astronomical "Skyscapes" that connect Earth and the night sky. Join him here as he takes us through his photograph "Venus Reflecting on Causeway Coast of Northern Ireland."

The bright planet Venus reflects off the still ocean surface and illuminates the evening sky in this view from the Causeway Coast in Northern Ireland.

Venus is the second planet from the sun, and as seen from Earth, it is also the second-brightest natural object in the night sky, surpassed only by the moon. Under moonless skies in dark locations, Venus can appear bright enough to cast shadows on the ground.

Venus got its name from the Roman goddess of love and beauty. Shining like a big, orange star in the sky, the planet is normally visible at dawn or dusk. Because it is the brightest planet, Venus has held a special significance in cultures around the world. Commonly referred to as the "morning star" and "evening star," the planet has long served as inspiration for poets, writers and painters. [Photos of Venus, the Mysterious Planet Next Door]

Circling the sun once every 224.7 Earth days, Venus passes between Earth and the sun every 584 Earth days. The planet spends a little less than half of that time (about 263 Earth days) trailing behind the sun as it rises and sets in the sky, making an appearance as soon as the sky darkens just after sunset. After passing behind the sun in its orbit and emerging on the other side, Venus will begin to rise slightly ahead of the sun for another 263 Earth days. This orbital dance is the reason Venus can be either a "morning star" or an "evening star."

In the image above, the bright, silvery light of this planet is reflected in the ocean surface on Northern Ireland's Causeway Coast. The orange planet has a bluish glow because the tiny water droplets in Earth's atmosphere diffract incoming light from heavenly bodies in the night sky.

Located at the foot of steep basalt cliffs on Northern Ireland's Causeway Coast, the Giant's Causeway contains about 40,000 interlocking basalt columns, the result of an ancient volcanic eruption. The rock formation is located in County Antrim on the northeast coast of Northern Ireland, about 3 miles (4.8 kilometers) northeast of the town of Bushmills. It was declared a World Heritage Site by the United Nations Educational, Scientific and Cultural Organization in 1986 and a national nature reserve by the Department of the Environment for Northern Ireland in 1987.