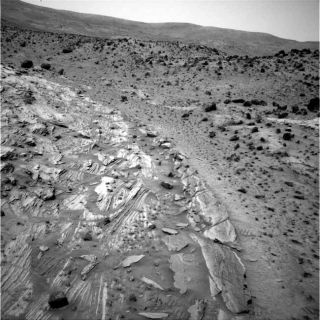 Hitting on bedrock. Spirit Mars rover has wheeled up to an exciting outcrop on the red planet in its exploration of Gusev Crater.
(Image: © NASA/JPL)

DALLAS,Texas – Those peppy Mars rovers, Spirit and Opportunity, continue to maketracks as they wheel about two diverse locales on Mars – far outstripping theiroriginal warranties of 90 days of lifetime and a target of roughly 2,000 feet(600 meters) of driving range when they landed on the planet in January 2004.

After1,200 sols – a "sol" is one solar day on Mars?Spirit is now surveyinga site called "Home Plate," a plateau within Gusev Crater. The robot recently wheeled itself into aremarkable discovery, Squyres reported.

"That'srough ? it's a tough way to drive," Squyresexplained. "But what we have discovered is that as you drive it, it digs awonderful trench as you move along and sometimes interesting things will pop upin that trench."

Thatwas the case a few weeks ago as Spirit investigated a self-dug trench thatexposed bright white soil. Utilizing a rover-toted spectrometer, scientistsfound that the uncovered material was 90 percent pure silica.

"Thisis the kind of stuff that you need to have water to make that kind ofconcentration of silica," Squyres said.

Whatcreated that pure silica concentration has spurred thought about volcanic fumerals and hot springs on Mars, Squyresadded. "Something very, very interesting happened here. And we discoveredthis after 1,200 days on the martiansurface. It really makes me wonder what else is out there."

Indeed,Spirit is presently investigating a rock outcrop, "one of the mostbeautiful outcrops I have ever laid eyes on," Squyressaid.

Furthermore,the rover is engaged in an experiment that combines the overhead imagery fromNASA's MarsReconnaissance Orbiter with Spirit's on-the-surface set of cameras.

Notto be outdone, the Opportunity rover at Meridiani Planum is on duty too.

Opportunityhas completed a partial traverse around Victoriaand is now headed back to an alcove dubbed "Duck Bay" – anda site seen as an entrance way down into the crater.

"Ouradventure continues and we hope to travel to Duck Bay.And if a careful safety review indicates that it's safe to go in, we're goingto go in," Squyres added. "We're going to doa lot of good science ? and then we're going to come out again and keepexploring."

Squyres told ISDC attendees that, in looking intothe future, he takes some comfort in the fact that the same agency, NASA, thatplaced the first humans on the Moon nearly 40 years ago also put Spirit and Opportunity on Mars fewer than four years ago. "Andthat gives me a lot of hope for the future," he concluded.

Marsis slated to be on the receiving end of another Earth-launched probe next year.

NASA'sPhoenixMars lander is being prepped for an early Augustliftoff, followed by a cruise through interplanetary space and an alighting onthe Red Planet in May 2008.

"It'sthe truth of Mars ? that's what we're after," said Peter Smith, Phoenix principal investigator at the University of Arizonain Tucson."What are the treasures that are hidden within Mars?"

Phoenix will use a set ofthrusters to slow down and plant itself down upon the Red Planet. That means, this time, no airbags and no bouncing across theplanet. Once firmly footed at its arctic landing spot, the craft is to use arobotic arm to dig down and scoop up icy soil for detailed, scientificscrutiny.

Smithsaid his goal with Phoenixis to get instruments on the surface and obtain "the inner truth of theplanet" – to try and make progress on the search for life on planets beyondEarth.

Onepiece of hardware onboard Phoenixis a microphone, part of the descent imager equipment onboard the Mars lander. "We have the opportunity to be listeningduring descent," Smith said.

Moreover,once on the surface of Mars, the device could hear the robotic arm plowing intothe icy landscape. In doing so, it would add that "extra sense to thetouch-and-feel aspects" of the mission, Smith observed.

Smithsaid that both Mars orbiters and landers will furthera deeper understanding of that distant world.

"Thereare definitely caves onMars," Smith said. But that raises a key question, he added: Couldthere be fractures inside those caves that come up from deep underground?

"Maybewater vapor is trapped into the cave and you have the kind of environmentwhere, perhaps, biology could exist," Smith said. This is certainly seenon the Earth, he continued, and many caves on our planet – even those that aresealed from the atmosphere and receive no sunlight – are stocked with forms oflife.

Thearmada of prior Mars missions have narrowed down how best to search for life onthe Red Planet, said Donna Shirley, president of ManagingCreativity and based in Seattle, Washington. She is a retiredmanager of NASA's Mars Exploration Program.

NASA'songoing Mars Exploration Program strategy is founded upon the build-up ofknowledge from successive missions to the planet, Shirley said.

Shirleyalso spotlighted that understanding Mars' past – how it changed and why – may wellprovide clues as to Earth's own future.

"Ithink the driving force for people exploring Mars,"Shirley pointed out, "is going to be the question, can we expand toother planets? Are there places to live? Can we actually live there? Can weafford to go to Mars and live there for a reasonable amount of money?"