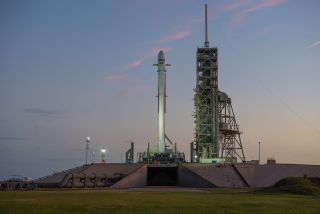 A spaceX Falcon 9 rocket stands atop Launch Pad 39A at NASA's Kennedy Space Center for a commercial satellite launch in October 2017 in this file photo. SpaceX will launch the secret Zuma mission for the U.S. government on Nov. 16, 2017.
(Image: © SpaceX)

SpaceX's planned launch of a secret Zuma payload for the U.S. government has been delayed at least 24 hours to Thursday, company representatives said today (Nov. 15).

A SpaceX Falcon 9 rocket was scheduled to launch the Zuma mission tonight between 8 p.m. and 10 p.m. EST (0100-0300 GMT) from Pad 39A at NASA's Kennedy Space Center in Cape Canaveral, Florida. But in a statement released early this morning, SpaceX representatives said they were pushing the launch to Thursday night.

"SpaceX is now targeting Thursday, Nov. 16, for [the] launch of the Zuma mission," SpaceX representatives said in the statement. "Both Falcon 9 and the payload remain healthy; teams will use the extra day to conduct some additional mission assurance work in advance of launch."

The launch time for Zuma mission remains the same, a two-hour window that opens Thursday night at 8 p.m. EST (0100 GMT).

The nature of the government's Zuma mission is a tightly-held secret, with few details known about the mystery payload tucked atop the Falcon 9. [Declassified Spy Satellite Photos and Designs]

We do know that the aerospace and defense company Northrop Grumman arranged Zuma's launch on a SpaceX Falcon 9 rocket for the government.

"The Zuma payload is a restricted payload," Lon Rains, communications director for Northrop Grumman's space systems division, told Space.com in a statement. "It will be launched into low-Earth orbit."

SpaceX representatives have not released any details on the exact orbital destination of Zuma, nor of the payload's specifications or intended use. However, SpaceX is expected to land the first stage of Zuma's Falcon 9 rocket back on Earth less than 10 minutes after liftoff at the company's Landing Zone 1 located at the Cape Canaveral Air Force Station, which is near NASA's Kennedy Space Center.

According to Rains, Zuma's launch on the Falcon 9 is the most cost-effective and low-risk option for the mission.

"Northrop Grumman is proud to be part of the Zuma launch," Rains said. "The event represents a cost-effective approach to space access for government missions. As a company, Northrop Grumman realizes that this is a monumental responsibility and has taken great care to ensure the most affordable and lowest risk scenario for Zuma."

Zuma's launch will mark the third classified mission for SpaceX for the U.S. government this year.

On May 1, the company launched the NROL-76 spy satellite for the U.S. National Reconnaissance Office. Then on Sept. 7, SpaceX launched robotic X-37B space plane into orbit on the classified OTV-5 mission for the U.S. Air Force. Both flights lifted off from Pad 39A at NASA's Kennedy Space Center in Florida.

The Zuma launch will mark SpaceX's 17th mission in 2017, all of which have been successful. Thirteen of those missions have featured Falcon 9 first stage booster landings as part of SpaceX's ongoing work to develop reusable rockets and spacecraft to lower the cost of spaceflight.

SpaceX's most recent mission was the Oct. 30 launch of Koreasat-5A, a communications satellite for the South Korean company KT Sat.