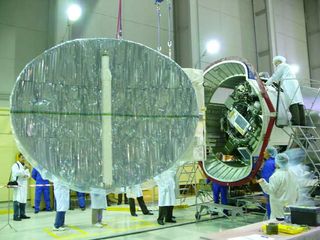 The 1,587-pound(720-kilogram) satellite, capable of detecting ground objects of lessthan three feet (one meter) in diameter, will join its two identicalpredecessors in a near-polar, 310-mile (500-kilometer) orbit. The two remainingSAR-Lupe spacecraft are scheduled to launch at four- or five-month intervals,with the full five-satellite network to be operational by late 2008.

Bremen,Germany-based OHB-System supplied the satellites and the launchers under acontract with the German armed forces that calls for a certain level ofSAR-Lupe capacity to be available without interruption for 10 years.

The firsttwo SAR-Lupe spacecraft were launched in December 2006 and July2007. German defense officials have said both are performing tospecifications.

By late 2009,SAR-Lupe is expected to be available to French defense forces as part of abilateral exchange that will give the German military access to France'sHelios-2 high-resolution optical reconnaissance satellites.

TheCosmos-3M rocket launched from the Plesetsk Cosmodrome in northern Russia andplaced the SAR-Lupe satellite into orbit about 30 minutes after liftoff. AFrench government-owned ground station at Kerguelen Island in the Indian Oceanpicked up the first signals.

The GermanAerospace Center, DLR, is responsible for controlling the satellite from DLR'sOberpfaffenhofen facility during the four-week test period.