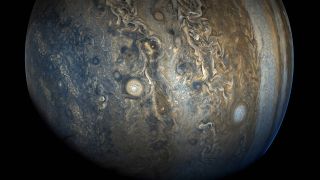 Jupiter's southern hemisphere is a swirling, curling sea of colorful clouds in a new image from NASA's Juno spacecraft and two citizen scientists.

The new image comes from data collected by the JunoCam instrument on Oct. 24, 2017, as Juno performed its ninth close flyby of Jupiter (its eighth science flyby), according to a statement from NASA. The raw data from the instrument were uploaded to the JunoCam website, and citizen scientists Gerald Eichstädt and Seán Doran took that data and processed it to create the image above. [Amazing Jupiter Photos by Juno and Citizen Scientists]

The image captures the intricate currents that Juno has revealed in Jupiter's cloud tops. The spacecraft was 20,577 miles (33,115 kilometers) above the tops of the clouds when this image was taken, at a latitude of minus 52.96 degrees, according to the statement.

Juno's orbit around Jupiter brings it close to the planet for only a few hours, once every 53 days. The spacecraft makes a close loop around the planet, crossing perpendicularly to Jupiter's equator along the poles. The planet's northern hemisphere has also been imaged by JunoCam.

JunoCam cannot take pictures through the duration of the flyby, so select regions are targeted during each close approach. Citizen scientists are invited to vote on which areas JunoCam should target.

Ever since Juno's first scientific flyby of Jupiter, citizen scientists have been processing the JunoCam raw data in creative ways, to make amazing scientific and artistic images.