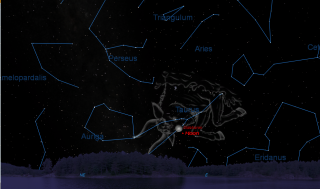 The moon will cover the orange star Aldebaran, the eye of Taurus, the evening of Sunday, Nov. 5. Here, the duo can be seen after the occultation in Atlanta.
(Image: © Starry Night software)

Tonight (Nov. 5),just one day after reaching its full phase for the month, the moon will temporarily hide the orange star Aldebaran, the brightest star in the constellation Taurus, in what astronomers call an occultation.

Eastern U.S. observers as far south as Miami will see the whole thing, while observers west of the region of visibility (which covers roughly the eastern half of North America) will catch the latter half. Observers east of the Atlantic can catch the event while the moon is higher in the sky, weather permitting. [The Moon's Aldebaran Occultation Explained: What to Know]

Farther south, the viewing situation will be not much better, as the moonwill have just risen and will be only 6 degrees in altitude; the best places to see it might be on the beach, looking out over the Atlantic.

On the other side of the Atlantic, Londoners will see Aldebaran disappear at 2:38 a.m. local time on Monday (Nov. 6) and end at 3:23 a.m. In Paris, observers will catch it at 3:51 a.m.; it will end there at 4:20 a.m. For both cities, the moon will be positioned high in the sky. In London, the moon will be 53 degrees above the horizon, and in Paris, the apparent location will be similar.

The zone of visibility's southern limit runs through Cuba, and observers there might catch a grazing occultation on the eastern part of the island. A similar setup occurs in Europe, south of Munich and in the Alps. Maps showing the "graze line" can be found here and here.

Editor's note: If you snap a great photo of the moon, Aldebaran or any other night-sky sight you'd like to share with Space.com and our news partners for a story or image gallery, send images and comments to spacephotos@space.com.