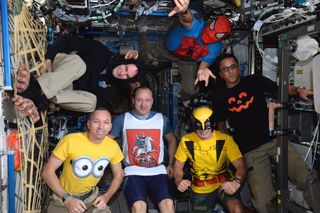 Some years an astronaut or two may dress up for Halloween, but this time all six crewmembers on the International Space Station got their moments in the spooky spotlight.

In a series of tweets, the space station crew shared their Halloween personas in time for the holiday. None went as far as NASA astronaut Scott Kelly's epic ape escape in February 2016, but the full crew posed under the direction of NASA astronaut Randy Bresnik. [Halloween Night Sky 2017: See These Celestial Treats!]

NASA astronaut Mark Vande Hei, a first-time space flier, posed dramatically as Wolverine in front of an American flag. He had spoons for claws, to avoid sharp objects on the space station:

NASA astronaut Joe Acaba, on his third mission to space, posed with a simple jack-o-lantern shirt:

Besides taking portraits of all the other crewmembers — and commanding the space station —  Bresnik found the time to pose as Papa Minion:

Russian cosmonaut Sergey Ryazansky looked dramatically out the window as a space monkey:

And fellow Russian cosmonaut Alexander Misurkin took a knightly stance in front of the Russian flag:

Finally, European Space Agency astrnoaut Paolo Nespoli got the chance to swing from the ceiling as Spider-Man:

"Now that I can literally walk on the 'ceiling,' I can finally be what I was meant to be," he commented when posting a photo of the whole crew.

Plus, there was a mystery cameo from Thing from "The Addams Family" (see right):

Besides dressing up, the space station crew has been busy harvesting lettuce, cabbage and mizuna from the Veg-03 experiment, according to NASA's space station blog, as well as setting up EarthKAM for students to remotely photograph Earth. Last week, they took a call from Pope Francis. And on Oct. 16, the crew got suppliesfrom a Russian Progress spacecraft; perhaps some of these costumes, or at least some Halloween treats, were on board.