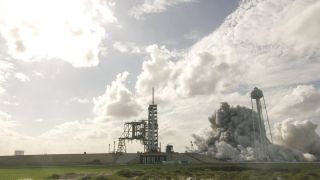 This evening (Oct. 11), SpaceX plans to launch a satellite using a pre-flown rocket for the third time ever, and you can watch the liftoff live.

A two-stage Falcon 9 rocket carrying the SES 11/EchoStar 105 communications satellite is scheduled to lift off from Pad 39A at NASA's Kennedy Space Center (KSC) in Florida at 6:53 p.m. ET (2053 GMT) today. You can watch it live via SpaceX's website, or here at Space.com, courtesy of SpaceX; coverage is expected to begin 15 minutes before launch.

The first stage of this Falcon 9 has flown once before: On Feb. 19, it helped launch SpaceX's Dragon cargo capsuleon an uncrewed resupply run to the International Space Station for NASA. (That was SpaceX's first liftoff from Pad 39A, which previously hosted Apollo moon mission and space shuttle liftoffs.)

On that day, the first stage returned for a pinpoint landing at a SpaceX facility at Cape Canaveral Air Force Station, which is next door to KSC. The company then inspected the booster and got it ready to fly again.

Such activities are part of SpaceX's effort to develop fully and rapidly reusable rockets, which could revolutionize spaceflight by slashing its cost, company CEO and founder Elon Musk has said. To date, SpaceX has landed Falcon 9 first stages on 17 separate occasions, most recently on Monday (Oct. 9) during the launch of 10 satellites for the communications company Iridium.

SpaceX first re-flew one of these landed boosters on March 30, during the successful launch of the SES-10 communications satellite. Another pre-flown first stage helped loft the BulgariaSat-1 spacecraft on June 23.

SpaceX aims to bring the Falcon 9 first stage back to Earth again today. If all goes according to plan, the booster will land on a robotic "drone ship" stationed in the Atlantic Ocean less than 10 minutes after liftoff.