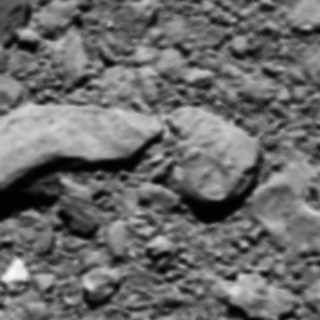 This is the last photo the Rosetta spacecraft took before crashing into Comet 67P on Sept. 30, 2016.
(Image: © ESA/Rosetta/MPS for OSIRIS Team MPS/UPD/LAM/IAA/SSO/INTA/UPM/DASP/IDA)

Nearly a year after the Rosetta spacecraft intentionally crashed into a comet, the mission's scientists have discovered a new surprise: the very last image Rosetta took before its cosmic demise.

The European Space Agency (ESA) launched Rosetta in 2004 on a mission to explore Comet 67P/Churyumov-Gerasimenko. It took 10 years for the spacecraft to chase down the comet, after which it spent two years orbiting the icy space rock.

Rosetta's mission came to an end on Sept. 30, 2016, when it plopped down onto the surface of the comet it had studied for years. During its 14-hour descent, the spacecraft's imaging system, OSIRIS, took plenty of pictures of Comet 67P until the very last minute. [In Images: Rosetta Spacecraft's Last Comet Photos During Crash-Landing]

Rosetta's final photo, however, didn't quite make it through to mission control back on Earth, as the transmission was interrupted halfway through, ESA officials said in a statement.

With only half the data for the image, ESA's automatic processing software was unable to generate an image. But Rosetta scientists found a way to outsmart this software and reconstruct the image from that fragmented data.

"The last complete image transmitted from Rosetta was the final one that we saw arriving back on Earth in one piece moments before the touchdown," Holger Sierks, principal investigator for the OSIRIS camera at the Max Planck Institute for Solar System Research in Göttingen, Germany, said in the statement.

"Later, we found a few telemetry packets on our server and thought, 'Wow, that could be another image,'" Sierks added. ESA released the new image Thursday (Sept. 28).

The reconstructed photo was taken right before Rosetta collided with the comet, when it was about 65 feet (20 meters) above the surface, and the view spans about 3 feet (1 m). Though the image is a bit blurry, it offers a detailed look at the comet's rocky surface.

Rosetta didn't take any photos of Comet 67P after it hit the comet. Even though it was falling at a speed of only about 2 mph (3.2 km/h), the controlled impact was rough enough to shut down the spacecraft.

Even if Rosetta had survived the impact, it wouldn't have stayed alive much longer. ESA scientists chose to crash it into the comet, knowing that the solar-powered spacecraft would not have enough energy to survive the trek back out into the solar system, where Comet 67P is now heading.