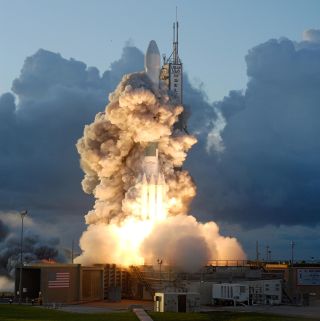 NASA's Dawn spacecraft has now been exploring the final frontier for a decade.

Dawn launched on Sept. 27, 2007, kicking off a $467 million mission to study the two largest objects in the asteroid belt — the protoplanet Vesta and the dwarf planet Ceres — up close. Vesta and Ceres are considered leftovers from the planet-formation period, so Dawn's work is designed to shed light on the solar system's early days (hence the mission's name).

The probe has done all that was asked of it and more, mission team members said. [How NASA's Dawn Mission Works (Infographic)]

"Our interplanetary spaceship has exceeded all expectations in the last decade, delivering amazing insights about these two fascinating bodies," Dawn principal investigator Chris Russell, of UCLA, said in a statement.

Dawn arrived at Vesta in July 2011 and circled the 330-mile-wide (530 kilometers) object for 14 months. The spacecraft's observations revealed, among other things, that Vesta's giant Rheasilvia Crater is even bigger than scientists had thought, with a diameter of 310 miles (500 km) and a depth of 12 miles (19 km).

And, if those dimensions weren't extreme enough for you, a mountain twice the height of Mount Everest rises from Rheasilvia's center.

In September 2012, Dawn departed Vesta for the 590-mile-wide (950 km) Ceres, the closest dwarf planet to the sun. The spacecraft arrived in March 2015, in the process becoming the first spacecraft ever to orbit two different bodies beyond the Earth-moon system, and the first to circle a dwarf planet.

Dawn has been studying Ceres from orbit ever since. This work has led to some surprising and intriguing discoveries. For example, Dawn has spotted mysterious bright deposits in multiple locations on Ceres — most notably, at the bottom of the dwarf planet's 57-mile-wide (92 km) Occator Crater.

"Though both Ahuna Mons and Occator appear dormant, they suggest that liquid water flowed once beneath the surface of Ceres, and may even still be there today, if it is enriched in salts that would lower its freezing point," NASA officials wrote in the same statement.

Three of Dawn's four orientation-maintaining reaction wheels have failed during the probe's time in space. But the mission team has powered through this issue, instead controlling Dawn's orientation using its hydrazine thrusters. Indeed, the spacecraft remains healthy overall, and is continuing to gather data from its 30-Earth-day-long elliptical orbit of Ceres, NASA officials said.

"This continues to be a mission for everyone who yearns for new knowledge, everyone who is curious about the cosmos, and everyone who is exhilarated by bold adventures into the unknown," said Marc Rayman, Dawn mission director and chief engineer, who's based at NASA's Jet Propulsion Laboratory (JPL) in Pasadena, California.