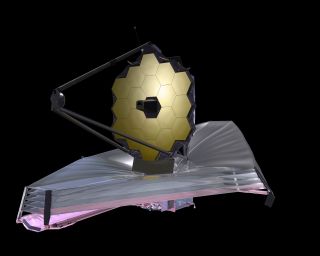 The successor to NASA's famed Hubble Space Telescope won't get off the ground next year after all.

NASA has pushed the planned launch of the $8.8 billion James Webb Space Telescope from October 2018 to the spring of 2019, citing spacecraft-integration issues.

"The change in launch timing is not indicative of hardware or technical performance concerns," Thomas Zurbuchen, associate administrator for NASA’s Science Mission Directorate at the agency's headquarters in Washington, D.C., said in a statement. "Rather, the integration of the various spacecraft elements is taking longer than expected." [Photos: Hubble's Successor, the James Webb Space Telescope]

Such precise infrared observations are possible only if James Webb is kept extremely cold. So the spacecraft is outfitted with a tennis-court-size sunshield to keep the scope in permanent shadow. (The sunshield will launch in a compact configuration, then unfurl to its full size in space.)

Testing of the telescope and science instruments is proceeding well at NASA's Johnson Space Center in Houston, agency officials said. But similar work with the spacecraft bus and sunshield, at a Northrop Grumman facility in Redondo Beach, California, has experienced delays, they added.

"Webb’s spacecraft and sunshield are larger and more complex than most spacecraft. The combination of some integration activities taking longer than initially planned, such as the installation of more than 100 sunshield membrane release devices, factoring in lessons learned from earlier testing, like longer time spans for vibration testing, has meant the integration and testing process is just taking longer," said Eric Smith, James Webb Space Telescope program director at NASA headquarters, in the same statement. "Considering the investment NASA has made, and the good performance to date, we want to proceed very systematically through these tests to be ready for a spring 2019 launch."

James Webb will lift off atop an Ariane 5 rocket from the European spaceport near Kourou, in French Guiana. The telescope will eventually make its way to the sun-Earth Lagrange point 2, a gravitationally stable spot about 930,000 miles (1.5 million kilometers) from our planet. Unlike the Earth-orbiting Hubble, James Webb will therefore be too distant for spacewalking astronauts to service and repair.

This is not the first delay for the James Webb mission. The telescope was originally scheduled to launch in the 2010/2011 time frame.