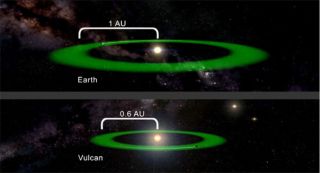 If found,that planet would be the real-life counterpart of the fictional planet of"Vulcan," well-known in the "StarTrek" universe as the home of Admiral (formerly Mr.) Spock and theentire Vulcan race.

The SpaceInterferometry Mission (SIM) PlanetQuest, which is overseen by NASA's Jet Propulsion Laboratory in Pasadena, California and slated to launch in 2015, isan orbiting interferometer that will link a pair of telescopes to function as amuch larger "virtual telescope."

40 Eridani,a triple-star system 16 light-years from Earth, includes a red-orange K dwarfstar slightly smaller and cooler than our Sun. While the planet of Vulcan wasnot identified with a particular star for many years, "Star Trek"creator GeneRoddenberry endorsed 40 Eridani as Vulcan's sun in a letter published inthe July 1991 issue of Sky & Telescope magazine.

Caltechresearcher Angelle Tanner, who proposed the idea that SIM might be able todetect Vulcan, had two questions: Can a planet form around 40 Eridani A? CanSIM detect such a planet?

SeanRaymond, a planetary theorist at the University of Colorado, Boulder, had theanswer.

"Sincethe three members of the triplestar system are so far away from each other, I see no reason why anEarth-mass planet would not be able to form around the primary star, 40 EridaniA," he said.

The starsof 40 Eridani lie hundreds of astronomical units (AUs) apart. One AU is thedistance between the Sun and Earth, or about 93 million miles (149 million kilometers).

If Vulcanlife were to exist on the planet, the orbit of the planet would have to lie ina "habitable zone" around the star where liquid water could exist,which would be at a distance of 0.6 astronomical units from 40 Eridani A. TheVulcans would have a year of about six months.

Water is,of course, a necessary ingredient in plomeek soup, Spock's favorite. (He hasbeen known to sometimes throw it across the room at Nurse Chapel when sufferingthe early effects of the pon farr, the Vulcan mating ritual.)

In determining if SIM could spot such a planet, Tanner useda set of mathematical models based on Newton's Laws. She was thus able toconclude that SIM would be able to definitively determine whether there is anEarth-mass planet orbiting in the habitable zone around 40 Eridani A, and couldalso determine its orbit. This is because the SIM PlanetQuest instrument willbe so accurate, it could measurethe thickness of a nickel at a distance from Earth to the moon.

The prospect of spotting this planet is quite exciting,since NASA's Terrestrial Planet Finder mission, planned for launch after SIM,would not only be able to take a rudimentary "picture" of the planet,but could also search for signatures of life such as methane and ozone.

The SIMoservatory will attempt to detect planets by looking for wobble in thepositions of nearby stars, which may indicate that orbiting planets are pullingat them. Also, the mission will determine positions and distances to starsseveral hundred times more accurately than current technology allows. SIM willopen an era of what NASA calls "precision astrophysics." It willpermit the construction of a "street map" to the Milky Way galaxy.

When askedwhat life would be like on Vulcan, Tanner speculated that the inhabitants mightbe pale.

"A Kdwarf star emits its light at wavelengths which are a bit redder compared tothose from the sun, so I wonder whether it's harder to get a tan there,"she said.

Trekkiesknow that the fictional Vulcan is hot and dry, with large deserts, so thenative inhabitants would of necessity spend a great deal of time in the sun. Ifthe Vulcans, with their copper-based blood, did tan, their tans would be, ofcourse, of a dark greenish color.