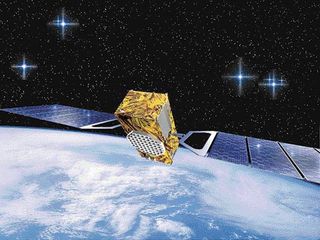 European officials have put joint Chinese-European collaboration on the Galileo system on pause because of questions over China's satellite navigation plan.
(Image: © ESA.)

SUMMERLANDKEY, Fla. -- Europe is not the only focus of efforts to build a rival to GPS,the U.S. constellation of navigation satellites. U.S. control of the world'sonly fully functional satellite navigation system is fueling efforts by China,Japan and India to develop alternatives to GPS for regional coverage, and inChina's case as a stepping stone to a global system, U.S. satellite navigationexperts said.

"Thereis a symbolic reason to deploy these systems. That is the idea that they wouldlike to be independent of any dependencies on U.S. controlled assets,"said Brad Parkinson, a retired U.S. Air Force officer and one of the originalarchitect's of the U.S.Global Positioning System (GPS), corresponding by email.

Parkinsonis among those who consider unfounded the fears expressed by leaders of othercountries in recent years that the United States would deny commercial accessto free GPS signals in a crisis, or as an economic warfare tool. All strategyconsiderations aside, the collateral effect would be to grind U.S. industry toa halt, Parkinson said.

U.S.government officials have labored to make that point around the globe."We're involved in two wars right now and the system has not beendisrupted or turned off," added Robert "Doc" Mirelson,the NASA representative to the U.S. National Coordination Office, which ispushing for any new systems to be compatible with GPS.

Nevertheless,other nations are trying to wean themselves from GPS, or in some cases improveits accuracy by combining GPS signals with those from new satellites. China, atleast in the eyes of one U.S. official, appears to be the closest to anoperational alternative. It has deployed a clusterof four navigation satellites over Asia, called Beidou,with the four carrying designations 1a through 1d. Beidoumeans Big Dipper in Chinese.

Bycontrast, Europe's proposed Galileo global constellation is years behindschedule. Europe certainly will miss the promised date of 2008 for the start ofoperations, and no new firm date is in place, a European Commission officialsaid. In late 2005, Europe launched a demonstration satellite called the GalileoIn-orbit Validation Element.

"They[Chinese officials] have [four] satellites and Galileo has one. I think there'sa lot of debate out there over who's going to have the system first," Mirelson said.

A wild cardin the race is Russia, where President Vladimir Putinhas been pushing for completion of the country's GlobalNavigation Satellite System, or Glonass,constellation to reduce dependence on GPS inside Russia. In a March speech tohis policymaking council, Putin bemoaned the relianceon U.S. satellite technology: "It is true that we do not yet have a choicein this matter. I hope that our navigation system will start working in2007," he said according to an English language Kremlin transcript.

Glonassis not the only global proposal. Chinese officials have described the Beidou satellites as an "experimental" regionalsystem meant to pave the way for an operational constellation called theCompass Satellite Navigation System. China's Xinhua News Agency reports that the long-term plan is to "graduallyextend" Compass into a global system for applications from commercialfishing to national security.

The mostrecent Beidou was launched Feb. 3 on a Long March 3Arocket as a backup to the three primary satellites, according to Xinhua.

The Beidou launches have complicated China's relationship withEuropean officials in charge of developing Galileo. Until recently, Chinese andEuropean engineers had been collaborating on technical projects under anagreement to support Galileo. European officials have put those joint effortson pause partly because of questions over China's Compass plan, a EuropeanCommission official said. "There's going to be some other system outthere, and we want to make sure it's going to be compatible with Galileo. Weare asking for information from them," the official said.

In theUnited States, at least one member of Congress is concerned that Europe,through its Galileo contacts with China, already might have unwittingly helpedChina improve its military capabilities.

Meanwhile,Japan is working on the first of three spacecraft planned for a regional navigationconstellation called the Quazi-Zenith SatelliteSystem (QZSS). The first QZSS satellite is scheduled for launch in 2009 into ahighly elliptical orbit.

InParkinson's opinion, it is "very probable" that the Japanese andChinese will continue their programs. "In part this is because of theworld perception that the [Department of Defense] controlled system can beeasily disrupted," he said.

In India,space officials have two navigation projects in mind. They plan to launch asystem of geosynchronous satellites to improve the accuracy of GPS signals foruse at Indian airports and airspace. Development of the GEO AugmentedNavigation system appears to have U.S. blessing. Raytheon, based in Waltham,Mass., is providing the ground terminals.

In 2006,India also announced it would develop an Indian Regional Navigation SatelliteSystem by putting a seven-satellite constellation in place by 2011.

In someways the orbital architecture debates that are no doubt taking place in China,India and Japan might mirror those that took place in the United States in the1970s.

"Forregional deployment, geo-synchronous is a very reasonable approach,"Parkinson said. In fact, some U.S. officials had advocated that as a test ofU.S. navigation-satellite capabilities, he said.

If othernations do succeed in setting up regional, and then global systems,and those signals are made interchangeable with GPS signals, that would a boonto satellite navigation customers, especially those in canyon or mountainousterrain, Parkinson said.

"The extrasatellites will greatly strengthen the geometry for these impaired users,"he said.