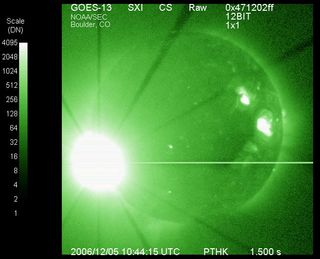 Radio waves produced during solar flare eruptions on the Sun can cripple the Global Positioning System (GPS) and other communication technologies here on Earth, scientists say.

The finding, announced today at the first Space Weather Enterprise Forum in Washington D.C., was confirmed during an exceptionally strong solar eruption last December that produced 20,000 times more radio emissions than the Sun does normally.

During solar flares, high-energy electrons are injected into the Sun's upper atmosphere. Radio waves are produced during this process and some of them propagate toward Earth. The solar radio waves, which cover a broad frequency range, act like noise that interferes with frequencies used by GPS and other navigational systems.

"This solar radio bursts occurred during the solar minimum, yet produced as much as 10 times more radio noise than the previous record," said Dale Gary, a physicist at the New Jersey Institute of Technology. "This was enough to swamp GPS receivers over the entire sunlit side of Earth."

"The size and timing of this burst were completely unexpected and the largest ever detected," said Anthea Coster of the MIT Haystack Observatory. "We do not know how often we can expect solar radio bursts of this size or even larger."