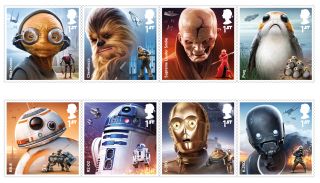 Only a few short months before the next "Star Wars" film arrives, the United Kingdom announced eight stamps to mark December's release of "Star Wars: The Last Jedi."

British artist Malcolm Tween illustrated these stamps, as well as a previous stamp set that honored the 2015 movie "Star Wars: The Force Awakens." The new stamps will go on sale Oct. 12. [Our Favorite 'Star Wars' Ships from a Galaxy Far, Far Away]

"Aliens [in 'Star Wars'] are nonhuman species who live alongside humans, speaking either human languages or languages of their own," representatives from Royal Mail, the U.K.'s postal service, said in a statement. "Many aliens have distinctive anatomies, from the tall, hair-covered Wookiees, such as Chewbacca, to the diminutively shaped, short-sighted Maz Kanata.

"Droids are everywhere in the galaxy," the officials added. "First developed in the distant past, they assist humans and aliens in every way, from flying spaceships and providing power to spreading war and terror."

Each stamp includes a featured character as well as a famous spaceship or vehicle from the series. Also, the "droid" stamps have fluorescent ink that shines under UV light.

Fans can preorder the stamps at www.royalmail.com/starwars.