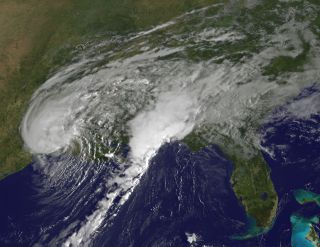 NASA satellites continue to track the path of Tropical Storm Harvey, which made landfall in Louisiana this morning (Aug. 30).

The sun is finally shining in Houston and parts of southeast Texas that are grappling with the effects of record-setting rainfall and subsequent flooding caused by Harvey. The storm is expected to be downgraded to a tropical depression by this evening, NASA said, but could still dump up to 10 inches (25 centimeters) of rain in some isolated areas of Louisiana.

The National Oceanic and Atmospheric Administration (NOAA) GOES-East satellite captured a high-resolution image of Harvey's massive, swirling white form as it crept over Louisiana at 7:30 a.m. CDT (8:30 a.m. EDT/1230 GMT). The center of the storm made landfall at 4 a.m. CDT (5 a.m. EDT/0900 GMT), according to the agency. [Hurricane Harvey: Photos of the Massive Storm from Space]

A nighttime image of the storm was captured by the Visible Infrared Imaging Radiometer Suite (VIIRS) instrument aboard the joint NASA-NOAA Suomi NPP satellite at 3:03 a.m. CT (4:03 a.m. EDT/0803 GMT) today. The image shows the center of storm's circulation hovering over the Gulf of Mexico, about 1 hour before it made landfall.

NASA's Soil Moisture Active Passive (SMAP) satellite, which measures soil moisture on Earth's surface, captured a view of southeastern Texas on Aug. 21 and 22, showing that the surface soil was already fairly wet, even before Harvey made landfall. Another image captured on Aug. 25 and 26, following Harvey's landfall there, showed moisture levels greatly higher along the coast.

Astronauts on the International Space Station have continued to tweet pictures of the storm from space and send their well wishes to people on the ground. Randy Bresnik, a NASA astronaut living on the station, tweeted a photo of sunrise and wrote, "Houston is reporting blue sky for the first time in many days! May this sunrise start the healing process."

Jack Fischer, another NASA astronaut on the station, tweeted a picture of the storm and wrote, "Harvey fills the window creating a path of destruction as it traverses the Gulf. Praying for the people there and hoping for sunshine."

The space station is managed from the Mission Control center at NASA's Johnson Space Center (JSC) in Houston. The facility is closed through Labor Day to all but mission-critical staff due to the flooding. On the JSC emergency management Twitter account, officials wrote, "Assessment and recovery teams underway. Beautiful day today."

Harvey is expected to continue to move inland, reaching as far north as Tennessee before its intensity significantly decreases, according to the National Weather Service.

Overnight (Aug. 29 to 30), Harvey struck hard at the Beaumont/Port Arthur area of southwest Texas, dropping an additional 12.5 inches (32 cm) of rain in some areas, NASA said. On average, southwest Louisiana and nearby areas are expected to receive 3 to 6 inches (8 cm to 15 cm) of rainfall as Harvey moves north, but isolated areas could receive as much as 10 inches (25 cm), according to the agency.