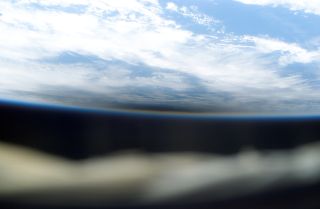 Astronauts captured the shadow of the moon moving over the Indian Ocean during a solar eclipse on Dec. 4, 2002.
(Image: © NASA)

In one day, we will be treated to a total eclipse of the sun over a large portion of the United States. This has not happened since 1979.

I remember observing part of a total eclipse when I was in grade school, back in 1970. The next day, I saw a newspaper article about a girl who became blind because she watched it for several minutes without any eye protection (when the sun was not totally obscured). Her mother came into her room and caught her, and made her stop.

Her blindness came on gradually, over the next several hours. This made quite an impression on me, and helped me to understand why the ancients came up with all kinds of superstitions and beliefs related to the phenomenon, pretty much all of them bad.

Many cultures believed that an eclipse was the sun being swallowed by a creature, in the form of a dragon, toad, bear or serpent, to name a few. They would encourage people to make noise to scare away the creature, in order to bring back the sun. There are stories of bad omens and ancient sacrifices. Imagine what it was like! Even today, some cultural superstitions and practices persist, but, thankfully, they no longer include human sacrifice.

Of course, humans have understood eclipse now for at least 500 years. But, it doesn't make the experience any less fantastic. During my mission aboard the International Space Station (ISS), I shot what I was told was the first astronaut video of a partial eclipse. It was different to observe the eclipse from above. It took the form of a large dark spot on the clouds of the Earth that grew lighter toward the edge.

I imagine what impression the upcoming total eclipse will make on the crew currently aboard ISS. You've heard about the so-called "overview effect" that some astronauts experience while observing our Earth from space. (It's real, I felt it.) The thing is, you don't have to be in space to experience this. An eclipse is one phenomenon that is actually more impressive from the ground. Even though we understand eclipse, it, like other awe-inspiring phenomena in our world and universe, should give us perspective and make us pause and think about what really is important.