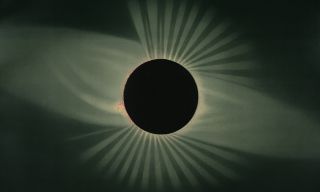 Paul Sutter is an astrophysicist at The Ohio State University and the chief scientist at COSI Science Center. Sutter leads science-themed tours around the world at AstroTouring.com. Sutter contributed this article to Space.com's Expert Voices: Op-Ed & Insights.

People enjoy looking at the sky. People enjoy writing down minute details of their daily lives. Ergo, when people see something interesting in the sky, they write it down. We have historic — and surprisingly, prehistoric — records of celestial events going back thousands of years, including solar eclipses. So when you pick just the right Instagram filter for your "solar selfie" this Aug. 21, you're following in the footsteps of an ancient and noble tradition. (Note: Do not photograph an eclipse without a safe solar filter when any portion of the sun is visible.)

Due to their very nature, prehistoric records of solar eclipses are the hardest to interpret. Does that swirly thing represent the sun? Are the concentric circles the full moon? The new moon? And what about those zigzags? If we're correctly interpreting the petroglyphs on the ancient monuments near Loughcrew, Ireland, then the oldest recorded solar eclipse dates to 3340 B.C.

Once we enter written history things get a little more reliable. A peculiar tale comes down to us telling the story of Chinese Emperor Chung K'ang, who apparently beheaded his court astronomers for failing to predict the eclipse of 2137 B.C. While the anecdote may be purely apocryphal, it is a good way to frighten young astronomers around the campfire.  [Total Solar Eclipse 2017: When, Where and How to See It (Safely)]

I should mention that the Chinese went on to record nearly a thousand eclipses from the eighth century B.C. until the fifth century B.C., with no associated beheadings reported.

They weren't alone, however. The Babylonians and Greeks busied themselves recording solar eclipses, using colorful language like "the sun was put to shame," as one ancient clay tablet attests. Solar eclipses were too hard to predict with any degree of confidence with the limited accuracy available to the ancients — poor consolation to the Chinese court astronomers, I know — but as far as we can tell, all the civilizations that kept track of eclipses quickly realized that they were a result of the natural motions of the sun and moon.

That said, the astrological worldview posited that the motions of the heavens were connected to earthly events, so solar eclipses weren't necessarily to be feared (at least, by the intelligentsia of their respective cultures), but were used to read the fortunes of emperors, generals, religious leaders and other important folk. [10 Solar Eclipses That Changed Science]

Entering the scientific era of astronomy, solar eclipses began to be used for more than just finding a tenuous connection to the fortunes of the big boss. Observers began to study the corona in more detail, discovering helium (Helios, like the Greek god of the sun — get the name now?) in the process. Later on, they would be used to verify the prediction of general relativity that massive objects can bend the path of light.

These days, as on Aug. 21, they will be an opportunity to ooh and ah at the beauty of the natural world while simultaneously doing research. And no beheadings.