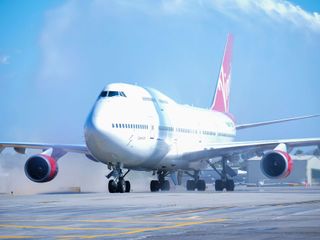 "Cosmic Girl," a 747-400 aircraft is being modified to launch rockets into space for Virgin Orbital. Here, the aircraft arrives in Long Beach, where the company is headquartered.
(Image: © Virgin Orbit)

LONG BEACH, Calif. — A Boeing 747-400 aircraft that previously flew passengers for Virgin airlines is one step closer to serving as a mobile rocket-launching platform.

Yesterday (July 31), the spaceflight company Virgin Orbit flew the commercial aircraft — named Cosmic Girl — to Long Beach, home to the company's headquarters. There, work will begin to outfit the aircraft with the external equipment to carry one of Virgin Orbit's LauncherOne rockets and launch it into space from an altitude of 35,000 feet (10,700 meters).

"This is like the first piece of the puzzle," Lt. Col. Kelly Latimer, a pilot for Virgin Orbit, told Space.com yesterday at a welcome event for Cosmic Girl. [Virgin Galactic's LauncherOne Rocket in Photos]

Virgin Orbit has spent more than a year inspecting and modifying the 747-400, stripping nearly 70,000 lbs. (31,750 kilograms) of unnecessary weight from the interior of the plane and adding electrical systems that will ultimately support the addition of a rocket mount (called a pylon) to one of Cosmic Girl's wings.

"In the last 16 months, our team has focused down and in, and done an incredible job with a broad team of experts and industry partners, to make this modification," Dan Hart, CEO of Virgin Orbit, said at the event in Long Beach. "It's been a huge, monumental activity."

"When we put the pylon and rocket on, this will probably be the most challenging flight test that I've gotten to do," said Latimer, who flew Cosmic Girl from the desert city of Mojave, California to Long Beach. "This'll be something that is so much more new and different than ever has been done before."

Latimer worked previously as a test pilot for NASA's Armstrong Flight Research Center, where she "conducted experimental flight test and test support" in vehicles including the 747SP (smaller than the 747-400) and the 747-100 that was used to carry NASA's space shuttle orbiters around the country. She has also flown T-38s, C-17s, BE200s and T-34s.

Latimer said that multiple factors will make the modified Cosmic Girl a challenging vehicle to fly, including the "size and weight of the rocket on the wing," the fact that said rocket will be full of explosive rocket fuel, and the fact that the nose of the aircraft will have to be tilted to a rather extreme angle in order to set the rocket on an upward path toward space.

"I think the challenges will be when we actually put on the pylon and rocket, and see what kind of drag and lift effects we have on that wing," she said. "We know from the fluid dynamics data that there's going to be quite a bit of drag added. We're hoping that the prediction is close to what it really is, because [if there's more drag] then it'll be a little bit challenging at high altitudes to get the speed we need to be able to pull the nose up."

By using an aircraft instead of a traditional, stationary launch pad, Virgin Orbit will gain more flexibility in terms of launch schedule because it doesn't have to compete with other launches, company representatives have said. In addition, launch pads typically need to undergo inspections between launches, whereas airline runways do not. The aircraft can also "operate through or around weather conditions and other impediments that delay traditional launches," according to the company's website.

Modified 747s have been used for various space-related purposes over the decades; a 747 was used during drop tests of the very first space shuttle, Hart said, as well as to ferry shuttles around the country between landings and launches. A modified 747 is also used for NASA's aerial telescope, the Stratospheric Observatory for Infrared Astronomy (SOFIA).

"A 747 is perhaps the most reliable and versatile aircraft in its family," Hart said. "[It's] a terrific aircraft … that will serve our launch purposes for years and years to come."

Virgin Orbit is one of three spaceflight companies that are part of the Virgin Group portfolio, along with Virgin Galactic and the Spaceship Company. Virgin Orbit's objective is to build an aircraft that can serve as a mobile launch pad for the company's LauncherOne rockets, which can be used to send small satellites into orbit.