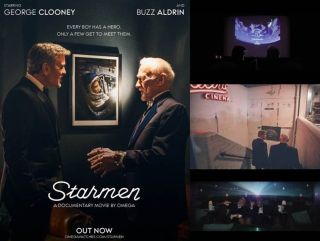 Houston, we have George Clooney!

On the heels of Moon Day (the July 20 anniversary of the Apollo 11 moon landing), watchmaker Omega has released a short documentary called "Starmen,"featuring one of the first men on the moon, Buzz Aldrin, and actor George Clooney. It's worth a watch, with or without popcorn!

In the film, Clooney gets the chance to watch the original Apollo 11 footage with his boyhood hero — sharing stories (and popcorn!) and reliving the moonwalks of Neil Armstrong and Buzz Aldrin during their historical lunar landing in July 1969.

"What were you doing when we first landed," Aldrin asks Clooney.

"Well, I was at home watching television with my mother and father and sister," Clooney says. "And we had this rinky-dink telescope that we bought. So, I was 8 years old and we looked through the telescope and I explained to my parents that I could see you guys walking on the moon at that point, which of course was impossible."

Clooney tells Aldrin that everything space exploration had a huge presence at his house when he was a kid. His family snacked on space food sticks and Tang and followed the missions closely.

"Everything was about the possibility of the imagination, and that anything was possible," Clooney says.

"Well, it brought the world together," Aldrin says.