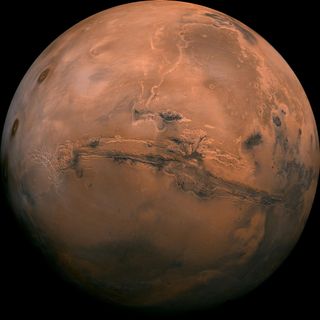 A mosaic of the Valles Marineris hemisphere of Mars. This view is similar to what one would see from a spacecraft, according to NASA.
(Image: © NASA/JPL-Caltech)

The Trojan asteroids that follow Mars in its orbit might have come from the planet itself, blown off in an ancient impact rather than being late arrivals, a new study suggests.

Several planets in Earth's solar system have Trojan asteroids — bodies that run ahead of or behind the planet. Jupiter, for example, has thousands. Earth has at least one, discovered in 2010. Uranus, Neptune and Venus also have them. Trojan asteroids are so called because the first ones to be discovered were named for figures from the Trojan War, including Achilles and Agamemnon. NASA plans to launch a mission in 2021, called Lucy, to study six of Jupiter's Trojan asteroids.

David Polishook, a researcher at the Weizmann Institute in Israel and lead author on the new study, posits that the Trojans following Mars were blasted off the surface of the young planet at least a billion years ago, and settled into their current positions soon after that. [Mars Myths & Misconceptions: Quiz]

Trojans orbit at Lagrange points, regions of gravitational stability numbered 1 through 5, where an object that is a small fraction of the mass of a planet and the sun, such as an asteroid, will maintain its position.

Around Mars, for example, Lagrange point No. 1 (or L1) is on an imaginary line connecting Mars and the sun, while L2 is directly behind the planet if one extends that same line. Extend the line through the sun so that it touches the point in Mars' orbit exactly opposite the planet to reach L3. L4 and L5 are at points 60 degrees ahead and behind Mars along its orbit. (If you draw lines between L4, L5, Mars and the sun, you get two equilateral triangles.) Mars' Trojan asteroids are at L4 and L5.

Mars has nine Trojan asteroids, the study notes. One, called 1999 UJ7, runs ahead of the planet at the L4 position. Three others, 5261 Eureka, 2001 DH47 and 2007 NS2, travel behind at L5. Astronomers had already studied the reflected light from Eureka and noted that the object was rich in the mineral olivine.

The new study shows that 2001 DH47 and 2007 NS2 also are rich in olivine. Olivine is rare in asteroids, but it is common in larger bodies — and occurs on Mars in impact basins.

"This mineral crystallizes in high pressure, for example in the mantle of terrestrial planets," Polishook told Space.com, "Mars, Earth and Venus have olivine, too, but dynamically speaking, it is much easier for Mars to capture Martian ejecta than to capture Earth, lunar or Venus ejecta."

That, Polishook told Space.com, is one good reason to think that the Trojans were pieces of Mars. Earlier studies estimated the age of Eureka is about 1 billion years, so that means the cluster of Trojans has to be at least that old.

The question, though, is how such large pieces of Mars settled into the Trojan orbit at the L4 and L5 points. Polishook thinks it happened because Mars and Jupiter — the latter, especially — have both migrated from the positions they were in when they formed.

Mars' orbit, like many of the planets, changed in the early solar system. As this change progressed, bits of the planet that blasted off in an impact, which might ordinarily have escaped or remained in orbit around the planet itself, ended up as Trojan asteroids, Polishook said. "If ejecta are present within a new orbit of Mars, then they may be captured into a Trojan orbit."

The Trojans could be captured this way only early in the solar system's history — once the planets settled into their current positions, any bodies that ended up in Trojan orbits would tend to stay there, and any subsequent planetary migrations would free existing Trojans, Polishook said.

The study appears in Monday's (July 17) issue of the journal Nature Astronomy.