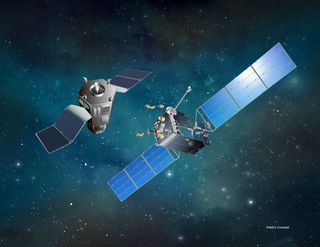 In February, Orbital ATK filed suit in U.S. District Court for the Eastern District of Virginia to stop the program, known as Robotic Servicing of Geosynchronous Satellites, or RSGS, on grounds that it violates provisions of the 2010 U.S. National Space Policy.

Upon completion of the work for DARPA, SSL can sell RSGS services to commercial and government satellite operators, work that Orbital ATK said will compete with its own satellite-servicing business. Orbital ATK filed suit on grounds that the RSGS program violates U.S. space policy, which in part bans the government from building or buying systems that "preclude, discourage or compete with commercial systems."

Orbital ATK pledged to continue to fight for "fair competition in the satellite-servicing arena" by pushing the issue with the White House, the Department of Defense and Congress, the company said in a statement.

"We intend to work with those … who believe in fair competition and would never want U.S. taxpayer dollars to favor one company over others," Orbital said.

Space Systems Loral said it was not a party to the Orbital ATK lawsuit against DARPA. "‎Per the fully compliant proposal we submitted, SSL is progressing with the design of the RSGS spacecraft," SSL Senior Vice President Steve Oldham said in a statement.

Space Systems Loral in December won a NASA contract for a satellite-servicing program called Restore-L, which is slated to launch in 2020. Restore-L is intended to demonstrate satellite refueling in low-Earth orbit using a NASA/USGS Landsat remote-sensing satellite.