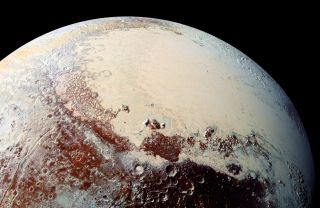 It's hard to believe that it's already been two years.

Since its 1930 discovery, Pluto had remained but a blur of pixels in even the best imagery, so the flyby was a revelation. New Horizons' photos revealed Pluto to be a diverse world with a stunning variety of features, including a 620-mile-wide (1,000 km) plain of nitrogen ice and water-ice mountains that rise 2 miles (3.2 km) into the dwarf planet's exotic sky. [Pluto Flyby Anniversary: New Horizons' Most Amazing Photos]

"I think the most surprising thing is how complex that little planet is," New Horizons principal investigator Alan Stern, of the Southwest Research Institute in Boulder, Colorado, told Space.com via email.

"It outstripped everyone’s expectations, and I am certain that we’re going to need an orbiter follow-up to make sense of Pluto," Stern added. "Fortunately, now we know how to do that and what new instruments to bring to bear."

The flyby also revealed, among many other things, that Pluto is slightly larger than scientists had thought; that its many-layered atmosphere is blue; that an ocean of liquid water might slosh beneath the dwarf planet's surface; and that all five of its moons are the same age (and therefore were probably all formed by a colossal impact between Pluto and another object billions of years ago).

"New Horizons will best be known, I think, for showing how to do outer planet exploration less expensively and for delivering spectacular science to boot," he said. "But I’d be remiss if I didn’t add that it’ll also be known for completing the first era of planetary reconnaissance by finally revealing Pluto, the last of the planets known at the dawn of the space age."

Indeed, the other eight originally recognized planets had already gotten an up-close visit by the time of New Horizons' Pluto flyby. The most recent such unveiling came back in August 1989, when NASA's Voyager 2 spacecraft cruised past Neptune. (Of course, the International Astronomical Union reclassified Pluto as a dwarf planet in 2006, reducing the number of "officially recognized" planets in our solar system to eight — a decision that remains controversial to this day.)

Speaking of legacies is a bit premature, however, for New Horizons' work isn't done. The probe is now embarked on an extended mission that's centered on a second flyby, which will take place on Jan. 1, 2019. On that date, New Horizons will zoom close to a small object called 2014 MU69, which lies about 1 billion miles (1.6 billion kilometers) beyond Pluto.