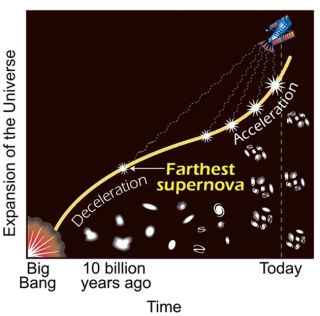 Measurements of the recessional velocity, distance and age of stellar explosions called supernovae provided the first direct evidence that the rate at which the universe is expanding is increasing.
(Image: © NASA.)

Empires mayrise and civilizations and ecosystems may crumble in the billions of years tocome, but matter as we know it will endure, according to a new study eyeing thefuture of the universe.

"Even ifmatter begins to decay, it will still be the dominant sort stuff in theuniverse," said physicist Lawrence Krauss of Case Western Reserve University,the lead author of the new study. "That's why I've kind of said that diamondsare forever."

Krauss andcolleague Robert Scherrer of Vanderbilt University used mathematical models todetermine that in the far future, radiation--including heat, light and all otherforms--will vanish faster than it can be replenished through the decay of matterinto component protons, neutrons and electrons. At the crux of the issue isdark energy, a hypothetical field or energy which permeates space and tends toaccelerate the universe's expansion.

Theresearch was detailed April 25 in the online edition of the journal PhysicalReview D.

Previoustheories suggested that radiation, not matter, would win out in the end becausematter would decay into additional radiation over trillions of years.

"Theuniverse started out radiation-dominated," Scherrer said in an interview."Today, the universe is mostly matter and what's left over from the radiationis the famous microwavebackground, which is very dilute."

Matter maywin out over radiation in the distant future thanks to dark energy, but the oddforce, as-yet unobserved directly, overall paints a bleak and lonely picturefor life as we know it.

"This iskind of one little small saving grace that we've stumbled across," Scherrersaid of matter's perseverance, adding that current universe forecasts predict avery cold cosmos in which life will have a hard time surviving.

Over thenext 100 billion years, dark energy is expected to accelerate the most distantgalaxies and stars in the universe beyond the speed of light, meaning that they willbe invisible to future observers. Some objects once visible at half theuniverse's current age of about 13.7 billion years are already invisible fromthe farthest vantage points, and in about 10 trillion years, only the localcluster of galaxies, including our own Milky Way, will be visible, researcherssaid.

"The futureis bad," Krauss told SPACE.com. "A universe with dark energy is theworst of all possible universes for the long-term future of life."

"Those arereally all at the basis of our modern understanding of cosmology," said Krauss,who said he first began theorizing about the future of the universe to discernhow it might end. "People of the future won't be able to know what the universeis doing."

That putsastronomers in a unique position today to study the universe, he added.

"I think weshould be buoyed by the fact that it's amazing what we're able to understandhere in this random time in the middle of nowhere in the universe," Krausssaid.