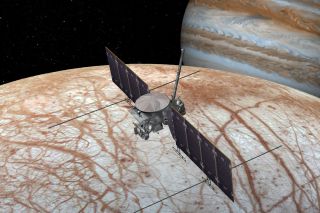 Artist's illustration of the Europa Clipper, a NASA spacecraft that will study Jupiter's ocean-harboring moon Europa during dozens of flybys.
(Image: © NASA)

Europa Clipper is a planned NASA mission that would investigate the habitability of one of Jupiter's moons, Europa. Underneath the moon's icy surface, an extensive ocean is thought to exist. The Hubble Space Telescope has detected evidence of plumes erupting from this ocean multiple times in recent years, adding more speculation that life would be possible on Europa.

The mission was officially renamed "Clipper" in 2017, after that title was used as a nickname for years. (The previous official NASA name was the Europa Multiple Flyby Mission.) Clipper refers to "the clipper ships that sailed across the oceans of Earth in the 19th century … three-masted sailing vessels renowned for their grace and swiftness," according to a NASA statement in March 2017.

If the mission launches, Europa Clipper would fly past the moon from 40 to 45 times to help scientists learn more about Europa's environment: its icy surface, its interior and the massive amounts of radiation surrounding it, coming from nearby Jupiter. Congress previously requested the mission launch in 2022, but recent budgetary changes may force the expedition to launch later in the 2020s.

Italian astronomer Galileo Galilei discovered Europa and the three other largest moons of Jupiter in 1610, shortly after the invention of the telescope. Due to Europa's small size, detailed investigations of the moon had to wait until the space age, when spacecraft did flybys of the satellite.

Europa was first examined by NASA's Pioneer 10 and Pioneer 11 spacecraft, in 1973 and 1974, respectively, although those missions focused on imaging Jupiter. Subsequent quick flybys took place during the NASA Voyager 1 and Voyager 2 missions, which went through Jupiter's system a few months apart in 1979. These early pictures, although taken from a distance, showed that Europa has an icy surface. At the time, many astronomers thought that all moons were similar to Earth's nearly atmosphere-free moon, so seeing locations such as Europa was a surprise.

"Even though the Voyagers did not pass extremely close to Europa, their images were of high enough quality that researchers noted [that] some of the dark bands had opposite sides that matched each other extremely well, like pieces of a jigsaw puzzle," NASA said in a retrospective on Europa exploration.

"These cracks had separated, and dark, icy material appeared to have flowed into the opened gaps, suggesting that the surface had been active at some time in the past," the NASA retrospective said. "Voyager images showed only a handful of impact craters, which are expected to build up over time as a planetary surface is constantly bombarded by meteorites over billions of years until the surface is covered in craters. Thus, a lack of large impact craters suggested that the moon's surface was relatively young and implied that something had erased them — such as icy, volcanic flows or settling of the icy crust under its own weight."

The joint NASA-European Space Agency Galileo mission to Jupiter performed several flybys of Europa between 1995 and 2003. One of that mission's most notable accomplishments was finding extensive evidence of a salty, liquid ocean beneath Europa's surface.

"One of Galileo's most important measurements showed how Jupiter's magnetic field was disrupted in the space around Europa. This measurement strongly implied that a special type of magnetic field is being created (or induced) within Europa by a deep layer of some electrically conductive fluid beneath the surface," NASA said.

"Based on Europa's icy composition, scientists think the most likely material to create this magnetic signature is a global ocean of salty water. A future mission to Europa could confirm the ocean's existence and begin to address questions about the moon's habitability for life as we know it."

In 2012, observations from the Hubble Space Telescope suggested the existence of a plume emanating from Europa's southern atmosphere. Follow-ups were at first difficult to obtain, but further observations of the moon yielded more plumes in 2014 and 2016. The two latter plumes emanated from a warm spot first detected by the Galileo mission, which indicates that the spot and the plumes may be linked in some way, scientists said in 2016.

Europa Clipper originated in a mission that was intended to include participation with the European Space Agency and the Japanese Aerospace Exploration Agency. The mission was called Europa Jupiter System Mission-Laplace and was intended to lift off in 2020. It would have included two probes: the Jupiter Europa Orbiter (from NASA) and Jupiter Ganymede Orbiter (ESA).

Ultimately, however, the two agencies dropped the collaboration due to a conflict between their space visions. ESA's contribution arose from the agency's Cosmic Vision 2015-2025 program, in which the scientific community determines the most pressing space-exploration goals for future missions. The United States, however, did not identify the Europa mission as a priority in the 2011 Decadal Survey from the U.S. National Research Council, according to ESA. (This was also the case for two other ESA missions, so the Europeans chose to withdraw as a partner, they said in a statement at the time.)

The European Space Agency moved ahead with a new independent mission, called JUICE (Jupiter Icy Moons Explorer), that would focus on Ganymede, Callisto and Europa. This mission was ultimately approved for launch and is expected to leave Earth in 2022 and arrive at Jupiter's system in 2030. Meanwhile, NASA and the U.S. science community forged their own path for a cheaper Europa orbiter mission, called the Europa Multiple-Flyby Mission. The mission was approved for further NASA development in 2015, the same year Congress asked NASA to consider adding a lander to enhance the mission's science.

In early 2017, Europa Clipper, as the mission is now called, reached its design stage (Phase B). At this part in mission planning, spacecraft engineers must determine the detailed designs of the spacecraft components as well as the instruments it is expected to take to Europa. Key challenges the mission must overcome include dealing with the harsh radiation environment and making sure that the spacecraft is adequately sterilized to meet NASA's planetary-protection guidelines. The 2018 presidential budget request, however, did not approve the lander.

"To preserve the balance of NASA's science portfolio and maintain flexibility to conduct missions that were determined to be more important by the science community, the budget provides no funding for a multibillion-dollar mission to land on Europa," stated the 2018 blueprint document, which was released in March 2017.

The $19.1 billion budget proposal (released in May 2017) designated $425 million to do further work on the mission, but NASA warned that if the budget matched current projections, it would not allow the agency to launch the mission in time for Congress' 2022 deadline. That deadline was set back in 2015. Europa Clipper is projected to require $2.48 billion, but so far, it is expected to receive only $1.63 billion by 2022.

"We do not have the budget to launch it in 2022, especially due to flat budgets in the out years," NASA acting Chief Financial Officer Andrew Hunter said during a teleconference, referring to the fact that NASA is set to have a flat $19.1 billion overall budget until 2022. If that budget holds, NASA added, Clipper may not launch until the mid- to late-2020s.

The current mission plan calls for Clipper to do as many as 45 flybys of Europa at different altitudes, ranging from 16 miles (25 kilometers) to 1,700 miles (2,700 km) above the moon's surface. The flybys would make close passes of Europa (where the radiation is the most intense) and then move to a zone much farther away, where the spacecraft could transmit and receive data from Earth and be prepared for the next flyby of the icy moon. Radiation is expected to be the limiting factor of the mission's lifetime, while most other space missions stop because they run out of fuel or lose the ability to point instruments correctly.

Here is the full list of science instruments expected to fly on the mission:

The spacecraft's nine instruments are designed to reveal more about the nature of Europa's surface and ocean. According to NASA, pictures and data would flow back to Earth from the cameras and spectrometers, radar would peer through Europa's ice to see how thick it is and what might be underneath, and the magnetometer would analyze the moon's magnetic field (information that would help refine measurements of the ocean's depth and salinity).

The team also plans to follow up on the Hubble Space Telescope observations of plumes. Specifically, the thermal instrument would probe for evidence of warmer water near the surface, while the Clipper also looks for water in the atmosphere.

"If the plumes' existence is confirmed, and they're linked to a subsurface ocean, studying their composition would help scientists investigate the chemical makeup of Europa's potentially habitable environment while minimizing the need to drill through layers of ice," NASA said.