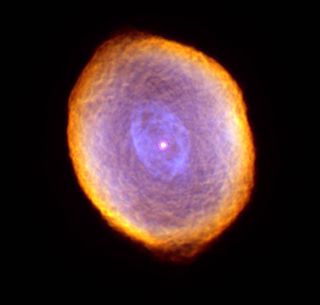 Space is bejeweled with the stunning IC 418, a planetary nebula with purple and orange coloring enveloping a bright white core. The nebula lies close to 2,000 light-years from Earth on the way to the Lepus constellation.

Planetary nebulas like IC 418 are the last stage of evolution for a star like our sun; it was once a red giant before it ejected its outer layers into space several thousand years ago. Since its eruption, the nebula has expanded to about 0.1 light-year in diameter, representitives from Space Telescope Science Institute in Maryland said in a statement.

The hot, white core visible in the image is the stellar remnant of the red giant, and its ultraviolet radiation creates the fluorescence in the nebula around it. The ejecta will continue to spread into the cosmos over the next several thousand years. The star will cool and fade over billions of years as a white dwarf.

This is the fate of Earth's own sun in some 5 billion years from now.

The camera filters used to isolate light from different chemical elements are represented by the added colors. Red, at the outer edge of the nebula, shows ionized nitrogen emission — this is the coolest gas in the nebula. Green shows hydrogen gas emission. Blue, at the center closest to the star, reveals ionized oxygen emissions — this is the hottest gas in the nebula. The Hubble Space Telescope  revealed the designs and textures within the nebula for the first time, and experts are still searching for their origin.