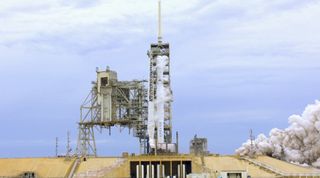 SpaceX test-fired a Falcon 9 rocket on June 15, 2017, prepping the booster for the planned launch of the BulgariaSat-1 communications satellite on June 19. The liftoff will be the second for this Falcon 9's first stage.
(Image: © SpaceX via Twitter)

The Falcon 9 is a two-stage vehicle. The first stage of this particular rocket helped power 10 communications satellites to orbit on Jan. 14, then came back down to Earth for a landing on a robotic SpaceX ship in the ocean. [Photos of SpaceX's 1st Reused Rocket Launch (& Landing)]

The booster will attempt to pull off a similar double success on Monday. The primary goal of the upcoming mission is to get the BulgariaSat-1 communications satellite aloft, but SpaceX will bring the Falcon 9 first stage down for another "drone ship" touchdown attempt shortly after liftoff.

SpaceX has pulled off 11 such rocket landings to date, and it has reflown one of the retrieved boosters. That milestone came on March 30, with the successful launch of the SES-10 communications satellite. (Falcon 9 second stages have never been recovered or reflown, though SpaceX founder and CEO Elon Musk has said the company may work to change that soon.)

These activities — and the reflight of SpaceX's Dragon cargo capsule, which the company achieved for the first time earlier this month — are part of Musk's vision to develop fully reusable launch systems.

Such technology will cut the cost of spaceflight dramatically, potentially opening the heavens to exploration, Musk has said.

Indeed, reusability is key to Musk's plan for colonizing Mars. (Helping to make humanity a multiplanet species is the primary reason that Musk founded SpaceX back in 2002, the billionaire entrepreneur has repeatedly said.)