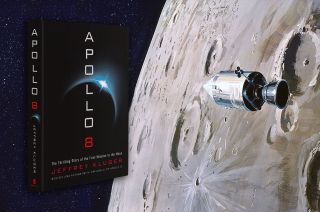 “Apollo 8" by journalist Jeffrey Kluger tells the thrilling story of the first mission to the moon.
(Image: © Boeing/Henry Holt and Co./collectSPACE.com)

HOUSTON — Jeffrey Kluger was just a kid growing up in suburban Baltimore when he watched it live on the color television in his mom's room. Even at 14 years old though, he knew that something had changed.

"The feeling just welled up in me, and I just thought, 'this is something new, something different,'" he said. "Something had just shifted. We had become a species of not just one world, but of two."

"I couldn't have been farther from the moon, but I was part of it — part of that story," he said.

Almost 50 years later, Kluger has written the story of that event, authoring "Apollo 8: The Thrilling Story of the First Mission to the Moon" (Henry Holt and Co.), now for sale in bookstores. Chronicling the December 1968 flight of NASA astronauts Frank Borman, James Lovell and Bill Anders on the first mission to orbit Earth's natural satellite, "Apollo 8" looks at how that mission came to be and how it unfolded, both in space and on the ground. [NASA Recreates Iconic Apollo 8 'Earthrise' 45 Years Later (Video)]

Kluger, who today is the science editor for TIME magazine, previously worked with Lovell to author "Lost Moon," which became the basis for the 1995 movie "Apollo 13" about the problem-prone lunar mission.

On Tuesday (June 13), Kluger traveled to NASA's Johnson Space Center and Space Center Houston, where he spoke about "Apollo 8" and where he sat down with collectSPACE.com for an interview.

collectSPACE (cS): How does the story of Apollo 8 stack up against Apollo 13?

Jeffrey Kluger: Apollo 13 was obviously an easier story to tell because there is innate drama in what happens when everything goes wrong. In some ways it was a good thing that was the first book I ever wrote, because the degree of difficulty was a little lower, it was a natural story to tell.

Apollo 8 was a little harder because, guess what? People did a brave thing and everything worked out perfectly. So where are the drama points?

One of the analogies I used when I was thinking of writing "Apollo 8" is the book "Seabiscuit" [by Laura Hillenbrand]. Everybody loves "Seabiscuit," but we know how that story goes: the horse wins three races, it wins the Triple Crown. But that doesn't matter because it is how you get to that happy ending that does. So my goal with "Apollo 8" was to make it clear what the tension was — not to fake it, there was enough natural tension and the stakes were naturally high enough — but just make clear what the crisis points were, what had to be overcome, and the consequences if we didn't overcome it, and I hope I was able to do that.

cS: Fifty years after the mission, is "Apollo 8" more about retelling forgotten history or are there new details that have surfaced five decades later?

Kluger: Both. People did forget this story. Apollo 11 [the first moon landing] obviously sucked all of the historical air after that happened. Ask the average person at a bar one night how many times did we go to the moon. They are not going to get the answer. They will say twice because they will think, "well he asked so it can't just be one. There was that Armstrong guy, so it has got to be twice." They would be shocked if you said nine times. So it was forgotten to an extent.

I think the passage of time, and a whole new generation, has made the story fresh again.

cS: You spoke with Borman, Lovell and Anders in writing this book. Was there a point where you considering writing it with them, as co-authors, as you did with Lovell on "Lost Moon" ("Apollo 13")?

Kluger: My collaboration with Jim [Lovell] is the only time I have collaborated on a book. I would not rule it out again.

Writing the book with Jim was a wonderfully transcendent experience and I would never change it for anything else. But I felt I wanted to be in a "Mercury capsule;" I wanted to be the sole pilot writing this book.

cS: Is it just coincidence that your two space history books focus on missions that Lovell flew?

Kluger: After Apollo 8 [the 1968 mission], I always thought any old fool could say that John Glenn or Al Shepard was his favorite astronaut, but you had to be a connoisseur to know why Jim was the man.

I think it is serendipity that the astronaut who I admire the most is the only person who flew on two of the three most consequential missions in history, aside from Gagarin. The three most consequential missions ever were Apollos 8, 11 and 13, and there is only one guy that was on two of them. It is a happy bit of serendipity that two of the missions that I care about the most were included. [Lunar Legacy: 45 Apollo Moon Mission Photos]

cS: As you describe in the book, Apollo 8 came at the end of a very tumultuous year, with assassinations of Robert Kennedy and Martin Luther King, Jr. and the Vietnam War. Do you think the mission would have resonated as much as it did were it not set against that conflict?

cS: The decision to fly Apollo 8 to the moon came as a result of the lunar module, the lander, not being ready to fly. Do you think if the lunar module had been on schedule and Apollo 8 had only flown to Earth orbit, would we have ever achieved a landing on the moon on Apollo 11?

Kluger: I think the fact the lunar module wasn't ready was a very good thing. Because once we had kickstarted the program with 8, once we had proven we could get out to the moon, then they thought, "Alright, we were ready for a landing."

Once Apollo 8 happened, we kicked off the missions once every couple of months and it was clear we had found our moxie. We were going to be able to move onto the surface of the moon.

Henry Holt and Co. published "Apollo 8: The Thrilling Story of the First Mission to the Moon" by Jeffrey Kluger on May 16, 2017.

Continue reading the interview at collectSPACE for Jeffrey Kluger’s views on Apollo 8 as compared to present and future space exploration.