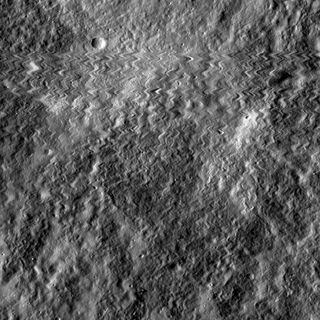 This image taken by a camera on the Lunar Reconnaissance Orbiter shows evidence that the instrument was struck by a small meteoroid.
(Image: © Malin Space Science Systems/Arizona State University)

A newly released photograph from NASA's Lunar Reconnaissance Orbiter (LRO) was taken at the same moment that the spacecraft was struck by a meteoroid traveling faster than a bullet, the agency announced this week.

The collision did not harm the health or operation of the spacecraft, and NASA scientists only became aware of the incident because of the picture, which looks as though it was taken by a very jittery camera.

The image perplexed LRO scientists at first, because LRO normally sends back "beautifully clear images of the lunar surface," according to the statement. The LRO camera (LROC) system consists of three cameras, including two narrow-angle cameras (NACs) that scan the surface right to left, and then stack those images together to create larger images, similar to the way a line printer works. The motion of the spacecraft moves the camera forward, so that it can slowly scan the entire lunar surface. The image in question features one very smeared right-to-left band that suggests the camera was jerked while scanning the lunar surface.

When the wobbly image appeared, scientists ruled out other potential causes (such as internal vibrations) because this blurring effect was not seen in the images from the other cameras taken at the same time. The team concluded that it must have been a small meteoroid that struck the camera. The scientists wanted to know how fast the meteor was traveling when it hit the camera, based on how much the camera moved (determined by the degree of distortion picked up in the image). It just so happened that they already had a piece of computer software that could help them do just that.

Before LRO launched, NASA commissioned a computer program to show how the cameras would fare during launch, when the payload would undergo intense vibration and lots of stress. The team used that same program to try to re-create the distorted image, and figure out how large the meteorite was and how fast it was traveling. They concluded that the space rock must have been about half the size of a pinhead (0.03 inches, or 0.8 millimeters), traveling at a velocity of about 4.3 miles per second (7 kilometers per second), with the "density of an ordinary chondrite meteorite," or 0.09 lbs. per cubic inch (2.7 grams per cubic centimeter), according to the statement.

The collision occurred on Oct. 13, 2014, but because the issue didn't interrupt the mission in any way, the team is only now reporting the incident as "a fascinating example of how engineering data can be used, in ways not previously anticipated, to understand what is happening to the spacecraft over 236,000 miles (380,000 kilometers) from the Earth," John Keller, LRO project scientist from NASA's Goddard Space Flight Center, said in the statement.

"A meteoroid impact on the LROC NAC reminds us that LRO is constantly exposed to the hazards of space," Noah Petro, deputy project scientist for LRO, said in the statement. "And as we continue to explore the moon, it reminds us of the precious nature of the data being returned."

Following the release of the LRO image, Alex Parker, a planetary scientist at the Southwest Research Institute in Colorado who is not involved with LRO, converted the vibrations of the camera into sound waves, recreating what it might have sounded like when the micrometeoroid struck the spacecraft (although the lack of an atmosphere around LRO means soundwaves have nothing to travel through). Young posted the sound file he created on Twitter.