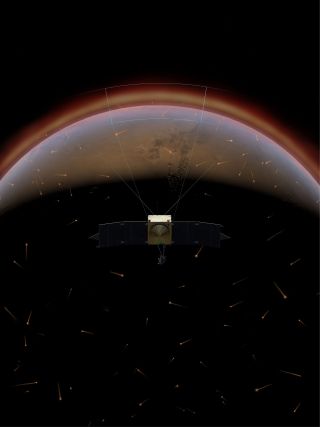 Metal detected in the sky of Mars may come from meteors streaking through the Red Planet atmosphere, a new study finds.

Interplanetary dust motes and chunks of rock often plunge at high speeds into the atmospheres of Earth and other worlds, blazing to form meteors as friction with air particles heats the objects. On Earth, the resulting smoke generates a persistent layer of metallic atoms in the atmosphere. However, until now, such layers were not directly seen elsewhere in the solar system.

These metal atoms can go on to influence their atmospheres: "After meteors burn up, their debris floats down through the atmosphere and can seed clouds," said study lead author Matteo Crismani, a planetary scientist at the University of Colorado Boulder. "This happens on Earth and probably on Mars too," he told Space.com. [Photos: NASA's MAVEN Mission to Mars]

To search for this meteoric layer on Mars, Crismani and his colleagues analyzed data from NASA's Mars Atmosphere and Volatile Evolution (MAVEN) spacecraft that was collected over the course of the probe's two-year mission. The researchers focused on the higher altitudes of the Martian atmosphere, looking for elements such as magnesium, iron and sodium that most likely came from above, from meteors, as opposed to from below, from Mars itself.

The scientists detected solar ultraviolet light rays that scattered off a layer of positively charged magnesium ions near an altitude of about 56 miles (90 kilometers) in the Martian atmosphere — most likely from a meteor source.

"Most everybody has seen a shooting star, and maybe [they] know what they're seeing, but most probably haven't thought about whether this happens on other planets," Crismani said. "Now we know for sure that they do." said

The researchers found that this meteoric layer could move up and down in a predictable manner. This happened because the lower atmosphere of Mars warmed and cooled seasonally and in response to dust storms, the researchers said.

Oddly, the scientists also found that the meteoric layer could decrease in density by up to a factor of about five as one approaches the moving border dividing day and night on Mars. Previous research, from 2010, suggested that this meteoric layer should show only negligible changes in density over the course of the Martian day, and Crismani and his colleagues said they currently have no explanation for this variation.

"In Earth's atmosphere, we think we understand just about every major chemical reaction. On Mars, we now know we've got a problem," Crismani said. "MAVEN consistently finds that Mars is more surprising and intricate than first expected."

But there's one mystery the meteors don't explain. In 2005, researchers first detected a strange, transient layer of electrically charged ions at altitudes of about 43 to 56 miles (70 to 90 km) in the Martian atmosphere. The new findings suggest Meteors do not provide an explanation for this puzzling transient layer, the recent study suggests.

"We suspect it may be related to the sun's influence," Crismani said. "As we've seen before, Mars' climate and atmosphere is strongly influenced by solar storms and [the sun's] energetic particles."

Future research can analyze what drives variations in the level of metals in the Martian atmosphere — perhaps magnetic fields or meteor showers, Crismani said.

The scientists detailed their findings online May 22 in the journal Nature Geoscience.